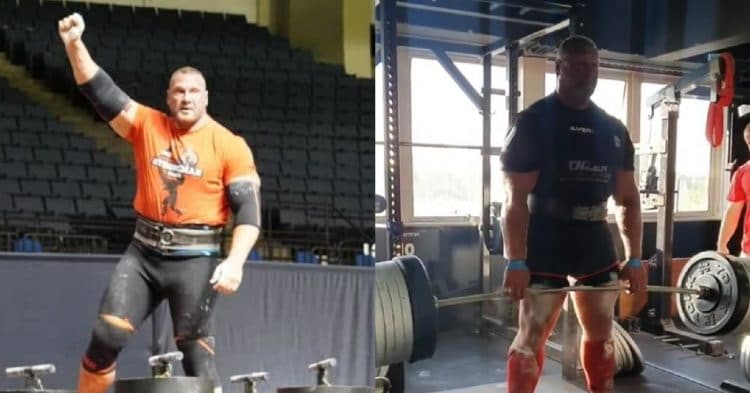 Strongman veteran Terry Hollands may not be at the top of his game anymore. However he showed recently that he is far from washed up, as he pulled some pretty serious weight.

41-year old Hollands has been at the top of the sport for the better part of fifteen years, competing with the best in the world. In this time, he has seen victories at the UK’s Strongest Man and England’s Strongest Man, as well as finishing on the podium in two separate World’s Strongest Man events. As such he is one of the legendary figures in strongman, gaining respect for his efforts over the years.

While he has not competed at the WSM since 2014, Terry Hollands is far from being considered incapable of crazy feats of strength. He proved this big time with a recent post to his Instagram. Here, the six-foot-six Englishman delivered on a crazy deadlift session, by pulling 815lb (370kg) for four reps like it was nothing.

So deadlifts weren’t quite as smooth as I’d have liked tonight. I came straight from physio and had my lats worked on pretty hard which isn’t ideal and also my foot slipped but still its solid reps with a decent weight. Im totally confident when im fresh I will get at least 3 at the next giants live but using the full minute hopefully 4 or 5 will be doable.”

Now Hollands was not exactly happy with his performance, but he looks to be going a little hard on himself. The first two reps were as smooth as butter, and while the third was a little shaky, he bounced back with a good final rep. On the other hand, his disappointment is a little understandable, considering he had been trying to prepare for this session for a little bit. Here he is, doing some speed reps of a 595lb pull, to get ready for this session.

“Just some speed deadlifts today. 270kg for 8 sets of 2. Getting ready for a big deadlift session next week”

Right now, Terry Hollands is getting to work in order to prepare for the upcoming Giants Live strongman event, where he will compete as a master. He is looking as good as ever in preparation for this event, and this training session was good to help him prepare. He continues to show that he is still a long ways away from being completely done with competition.