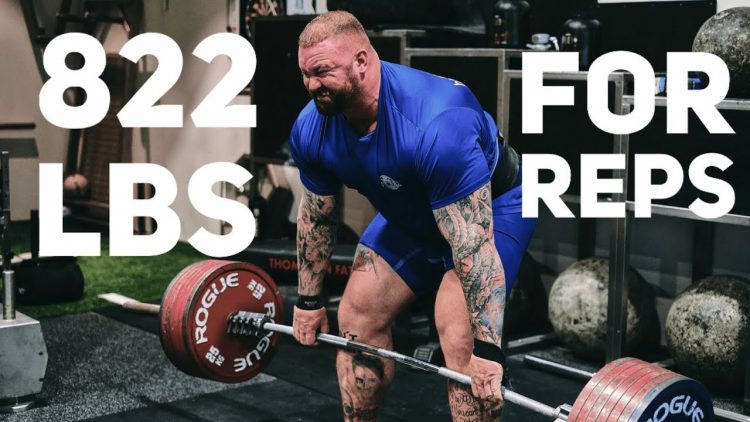 Hafthor Bjornsson is currently 9 weeks out of appearing at the Arnold Strongman Classic and things are starting to get interesting. As the current reigning and defending Arnold Strongman Classic champion, Thor has a lot to prove.  He will have 6 other guys gunning for his head trying to dethrone the Icelandic titan of his throne and to say he has taken his training seriously would be quite an understatement.

In one of his recent Instagram posts, he shared a video of him doing the famous Cyr dumbbell press. The dumbbell is not only heavy (129kg in this case) but it’s famous for having a very thick handle which makes manipulating the dumbbell a nightmare only a giant Strongman can conquer. The 129kg dumbbell is no match for the power and might of the Arnold Strongman Classic champion.

The (yet to be confirmed) weight of the dumbbells is supposedly 128kg for the “lighter” dumbbell and the heavier is going to be a literal record-setter, 150kg. When I mean “literal record-setter” I do mean it, because that’s the current world record held by Mateusz Kieliszkowski who is skipping this year’s Arnold’s because his recovering some injuries.  So, since the Polish powerhouse isn’t competing, whoever manages to lift the 150 kg dumbbell equals the record and if someone does it for reps, beats the record.

Since it is nearly impossible to have a Strongman competition without a deadlift event, Arnold Classic is bringing back the elephant bar deadlift. Thor has been working on his deadlift a lot in the past few years and he is currently one of the best deadlifters on the planet and the running candidate to take out Eddie’s 500 kg record. He is also pretty much the only competitor that finished the elephant bar deadlift without tearing something.

In the video above he is easily doing reps with 800lbs+ on the bar, which all but confirms we will be seeing Thor give everyone a run for their money at the Arnolds’.

VIDEO: This 80 Year Old CrossFit Athlete Is Probably In Better Shape Than You