Former rivals express their interest in boxing each other 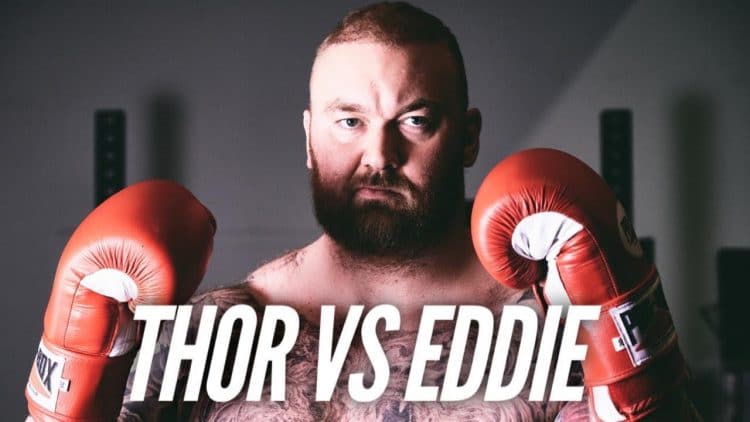 You can file this under the “I’ll believe it when I see it” category. Eddie Hall has had a long-lasting rivalry with Hafthor Bjornsson from his Strongman competition days.  When Eddie stopped competing, the rivalry died down a bit but no new friendships were made on that day. They don’t secretly send each other memes and exchange food recipes. They were rivals, now they kinda just tolerate each other’s company when they have too. You could even argue that in a sense, the rivalry continued to live on through Eddie Hall‘s close friend, and one of the strongest humans alive, Brian Shaw.

A potential new chapter in this rivalry has been started by a simple youtube fan question. Eddie Hall held a live “Q&A” session on his youtube channel and one of the fans asked, “who would win in a fight, you or Thor?“. Eddie tried his best to not stir up old drama and be an internet warrior and basically said that he has no interest in fighting Thor and that he has put that part of his life behind him.

However, Eddie is a loudmouth brit after all and as such he can’t let his mind stay quite.  He then proceeded to say that he has always been a fighter both figuratively and literally throughout his life, he trains boxing now and that Thor would stand no chance in a potential boxing fight against him.

Back to the question, who would win in a fight between me and Thor? I just know what I’ve had. I’ve been brought up by fists. I’ve always been a figther,  i always fougth my way up,  love boxing. I’m very into boxing, I like keeping fit in the boxing ring

Fast forward a week later and Thor Bjornsson had some words of his own on this matter.

Thor goes on and explains that if Eddie is really serious about this, the two could do it 2021 at earliest because Thor is now prepping for Arnold classic and should this potential match-up come to life he would want at least a year worth of preparation.

As much as this tickles my fancy in terms of strange fights no one asked for and yet somehow they happened, I don’t think it’s happening anytime soon If at all it happens. However, we are living in a world where CM Punk fought in the UFC twice, and two YouTubers headlined a boxing PPV, also twice.