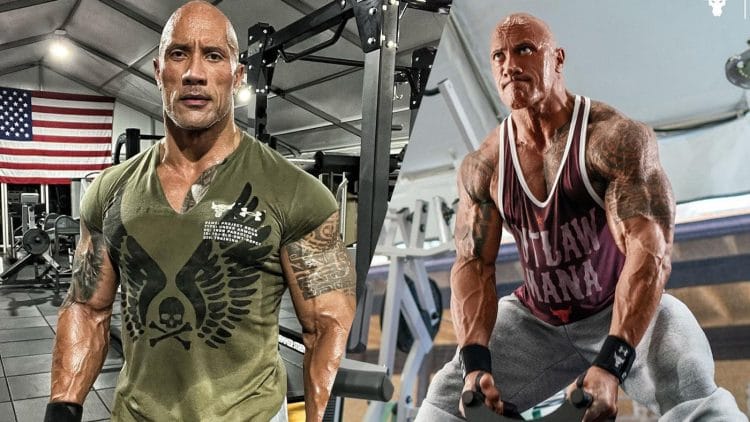 Fans around the world look up to Dwayne Johnson’s larger-than-life persona and unparalleled work ethic for motivation. Johnson is also one of the most influential figures on social media. He shares workouts, ongoing projects updates, and self-help tips with his 277 million Instagram followers. Late-night workouts after all the business are done for the day are an integral part of Dwayne Johnson’s routine.

Recently, Johnson shared a post-workout photo after a late-night workout session on his Instagram. The caption to the post contained his favorite inspirational quote. Well-recognized globally, Dwayne Johnson carries the responsibility of numerous brand-building and other projects. The caption to Johnson’s post hinted at the stress associated with being in that position.

‘After a very long work week of endless hours and getting pulled in a thousand different directions ~ man it felt good as hell to get in here and mentally recalibrate and physically get spent & bent. F*ing love it.’ Dwayne Johnson wrote in the caption.

Dwayne Johnson asserts that he is the hardest working person in the room. Continuing further, the 49-year-old shared one of his favorite quotes from Theodore Roosevelt’s speech.

The quote belongs to Theodore Roosevelt’s speech ‘The Man in the Arena’. Johnson has referenced it multiple times in the past. He left a simple message for his followers with this quote: If you’re actually putting in the efforts, ignore the noise and keep doing what you’re doing.

If you have followed Dwayne Johnson religiously, you know that the Rock is always working. Johnson is currently busy promoting his Netflix movie Red Notice that made its debut on the platform on November 12.

Johnson will play the titular anti-hero in the DC movie Black Adam. The movie will hit the theatres in July 2022. Johnson wrapped up shooting Black Adam in July of this year and stated that it was easily the hardest labor and toughest grind mentally and physically of his entire career.

Johnson will reunite with Emily Blunt for the Netflix superhero movie Ball and Chains after Jungle Cruise. The 49-year-old is also likely to team up with Vin Diesel for The Fast and The Furious series following the latter’s appeal for Johnson to ‘show up’ after being at odds for a while.