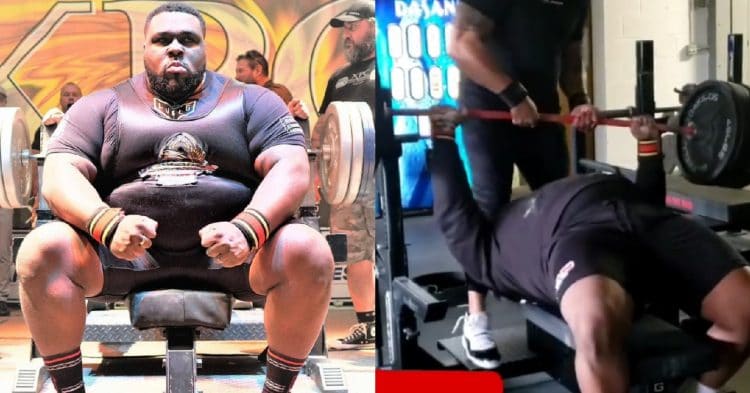 Thomas Davis is known for his exceptional bench press skills. However a recent attempt nearly saw him dropping weight on his chest.

Thomas “TD” Davis is a world record setting powerlifter, and frankly a beast of a man. Seeing as how he started off his career while working as a corrections officer, it comes as no surprise that he refers to his bench style as “jailhouse,” which sees a lot of focus on the upper body. Nonetheless, he has still been able to use his skill to earn himself several bench press records, and competition victories over the years.

However a recent video, posted to his Instagram, shows what can happen when Thomas Davis gets a bit rusty. He was going for five reps of a 585lb bench, but really struggled getting the final rep up. Let’s just say, it was a good thing he had a spotter there with him.

Went for 5 but got outta groove.”

Although he could not get that fifth rep in, there is no denying how impressive this performance was, from TD Davis. It just goes to remind us how special he is, when he is in the groove of bench pressing. Here he is, simply blowing a 700lb bench out of the water, at the Arnold XPC earlier this year. He speculates that it could be the fastest attempt ever, and he very well could be right.

“Was This The Fastest 700lb Attempt??
Compared To Others, Its Pretty Close…”

There can be no overstating how impressive of an athlete Thomas Davis is, when he is at the top of his game. Of course, this does serve as a prime example of why it is important to have a spot, no matter how talented you are. That being said, we look forward to seeing him hitting the bench more regularly moving forward.

How Do I Calculate My TDEE Manually?