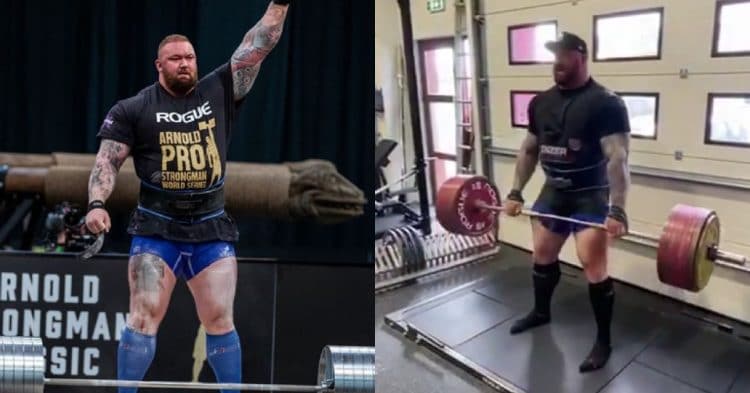 Thor Bjornsson has been working towards accomplishing a lofty deadlifting goal. In the process of doing so, he recently did a pretty hefty deadlift set.

Bjornsson has been really looking unstoppable as of late. With 2019 being a somewhat lackluster year for the Icelandic strongman, he was really hoping to turn things around in 2020. That is precisely what he did too, racking up his third straight Arnold Strongman Classic victory earlier this month.

Not only did he look incredible in competition, but Bjornsson has been looking unstoppable in the gym as well. Most recently that was seen in an Instagram post, where he was working on improving his deadlift. Here, he managed to blast out an 881lb (400kg) triple, doing so like it was nothing.

As Bjornsson explains in the post, this is all part of the process to train for an even bigger goal. It is his plan to be able to deadlift 1104.5lb (501kg) by next month. There is still a bit to go, but with work like this, it seems more like an inevitability than a possibility.

Thor Bjornsson has been working towards this goal for a while now, but things are really starting to pick up. It just goes to show how all of the work is paying off, and everything is coming together. Here he is, about a week earlier, doing another massive deadlift set:

If Thor Bjornsson is able to hit that 501kg deadlift next month, it will be the heaviest deadlift of all time. That is an incredible accomplishment, should he able to achieve it. Not to put the cart before the horse, but all signs point to the fact that he is likely going to be able to hit the lift. Time will tell though, as this is obviously not an easy thing to do.