Since retiring from pro Strongman competition, Eddie Hall has been a busy bee. He’s doing a sequel to his documentary, he’s doing Strongman.com content, he’s got a starring role in a movie and he’s doing youtube shenanigan.

To celebrate his 500k youtube subscriptions, Eddie has shared some “behind the scenes” footage and info from the legendary day when he became the first human to deadlift 500kg.

The story off Eddie’s deadlift has been told, re-told and re-told again thousands of times by now. But, since you are already reading this, let’s refresh our memories. In 2015, he pulled 463kg like it was nothing for a then-world record and set his sights on larger goals.

The mythical, impossible, undoable 500kg deadlift and winning World’s Strongest Man. Fresh of the heels of his 2015 world deadlift record he gets a giant confidence boost and decides to bet the Giants Live promotes that he will deadlift 500kg. At the time Eddie uttered those words, the 500kg was considered impossible and incomprehensible by a vast majority of the people in the strength community. So, when someone comes to you and says “hey, how much you wanna bet I’ll be the first guy ever to deadlift half a tonne?” you laugh at his face and accept the offer. This is exactly what happened and from that moment, Eddie was a man on a mission.

While Eddie was a very strong man and was deadlifting very impressive numbers, for a while he couldn’t come anywhere near the needed number, 500.  He goes for 455kg in training, and barely gets it….he tries his luck with 485 kg but the bar doesn’t go above the knees.  For a while, it looked like Eddie might have bitten off more than he could chew.

In Eddie’s opinion, the problem wasn’t of physical nature rather that of mental nature. So, he goes to a psychiatrist which then leads him to a hypnotherapist. Along the way, he gets introduced to the concept of “hysterical strength“, a terminology for situations where the human body uses 100% of muscle tissues and allows an individual to achieve an astounding feat of strength. Usually, this happens in times of great distress and life-threatening situations. With the help of the above-mentioned hypnotist, Eddie managed to create “dark” scenarios in his head which would help him trigger the “hysterical strength” which would allow him to lift the 500kg.

The aftermath of lifting such astounding weight on the body is potentially lethal and life-shortening. He notes(and shows) in the video how his eyes changed colors as he was completing the lift from the pressure put on his body. Speaking of pressure, the lift was so damn intense and powerfull that his entire face turned into a faucet and started leaking blood. Eddie then mentions that deadlifting half a tonne caused him temporary partial blindness in his eyes and head trauma that made him have temporary memory loss. Yes, Eddie Hall became the first human to get head trauma through deadlifting.

Towards the end, Eddie sends a message to all the Strongmen and Powerlifters who think they can beat his score of 500kg.

“I’m sick to death of people saying they’re gonna pull 500 kilo…(mockingly) you know, it’s third event, or maybe I do it next year after I take a year out or it’s a different bar, I wasn’t wearing a suit. ” …. ” Get a suit on, get your straps on, come into the world deadlift champs (at giants live) and pull 501 kilo. “ 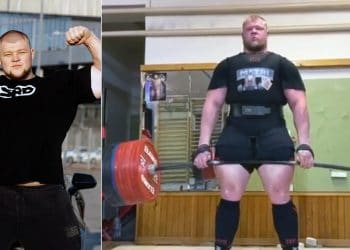