Watch Thor "double over a grand' in training!

Hafthor Bjornsson will be making his long-awaited return to competition in March at the Arnold Strongman Classic in Ohio after taking a hiatus last year following his 9th consecutive Iceland’s Strongest Man victory in August.

Well, we know Thor is no stranger to deadlifting some insane amounts of weight and one of his most recent training updates involved him pulling 455kg/1,003lbs for a double with an Elephant bar replica.

In the video, you can also see Martins Licis (2019 World’s Strongest Man champion) cheering him on but it definitely wasn’t an easy double.

Thor wrote this on Instagram… “The deadlift coming along nicely in this years Arnold Strongman prep!
455kg/1003lbs for 2 reps which is a PB!

I know this is a elephant bar replica but has anyone doubled over a grand in training? @mad_scientist_duffin maybe?“

It appeared he was curious to know if the legendary Chris ‘Mad Scientist” Duffin has pulled this much weight in training and the latter’s response was “Congrats big man!!!“ 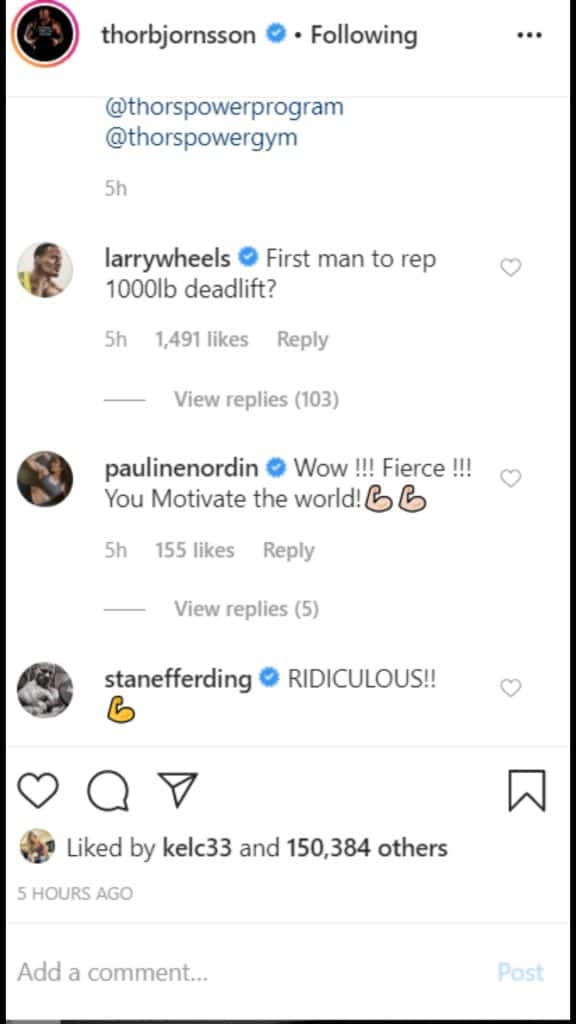 If you remember from last year’s Arnold Classic, Bjornsson improved on the all-time Elephant bar deadlift world record which he set back in 2018, by pulling a massive 474 kg (1,045 lbs). He then attempted 501kg (1,105 lbs) although he was unsuccessful missing out on the $50 offered by Rogue to the man who could complete this lift.

But it’s a new year and we’re sure everyone is looking forward to his performance at the 2020 Arnold Classic where he’ll be aiming for his third straight victory after winning the prestigious title in both 2018 and 2019.

Bjornsson also revealed the unofficial list of this year’s Strongman events which you can view here and we’ll be sure to keep you updated all the way up to the day of the competition.