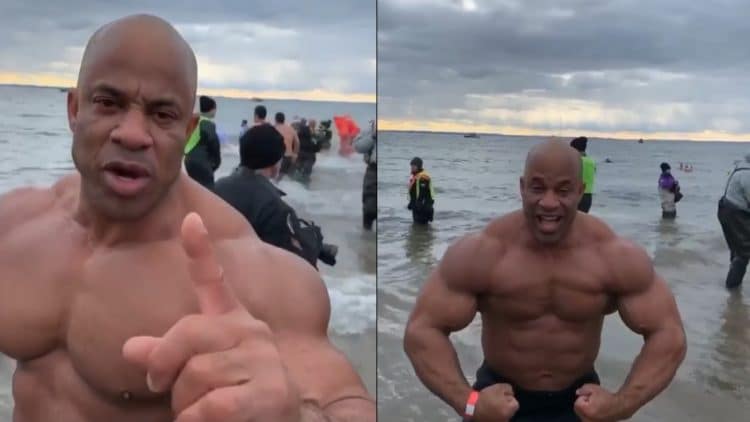 Victor Martinez did a lot during his time as a pro bodybuilder. However, he is looking to do more for a good cause, with a recent activity for charity.

Martinez had a long and successful career as a bodybuilder. From competing multiple times in the Olympia, to winning the Arnold Classic, he constantly competed among the best in the world. All the way up until his last contest in 2017, he was a force to be reckoned with every time he stepped on the stage.

Martinez recently announced that he would be returning to competition, so he has been training hard. This became evident when he was seen recently hitting the beach, in an Instagram post. Sure, that seems strange, considering it is the middle of winter. Although he is quick to explain that he is doing this craziness for charitable efforts.

“There it is everyone! Polar Bear Club, one more year! Charity! Hooray! Feeling good, for a great 2020. Arnold Classic, one more time!”

The Polar Bear Club that Victor Martinez refers to, is in reference to the Polar Bear Plunge, which is an annual event for charity. This event consists of people plunging into the cold ocean waters, during the wintertime, around the world. In the United States, this raises money for the Special Olympics, and the Make-A-Wish Foundation.

In addition to that, Martinez mentions the fact that he is making one last return to competition, at the Arnold Classic. The event, which goes down this March, in Columbus, Ohio, features some top competitors. Nevertheless, this will be his first contest in over two years, but he is jumping in with both feet. Judging by the look of his physique at the beach, he looks like he has been training hard to prepare for this return.

Victor Martinez looked great here raising money for charity. It will be exciting to see how he looks at the 2020 Arnold Classic.

Tia-Clair Toomey To Make Return To Woodapalooza Next Month