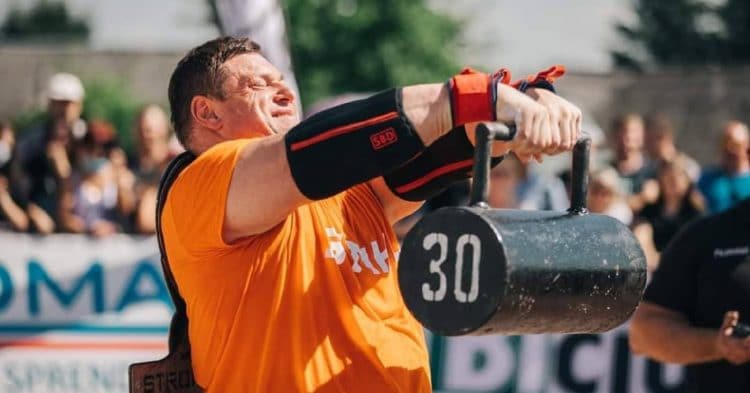 It is already tough to argue that Zydrunas Savickas is one of the best strongman athletes of all time. However there can be no argument that he is the strongest person to come from Lithuania, especially after he won his sixteenth victory at the Lithuania’s Strongest Man.

If you were to say that Big Z was sitting at the top of your list of the best strongman of all time, you would see very little complaints. The list of accolades that he has go on for a while, with victories at virtually every major strongman competition there is. He holds four World’s Strongest Man wins, and eight victories at the Arnold Strongman Classic, to just name a few.

One market that Zydrunas Savickas has been dominating for a long time, is the Lithuania’s Strongest Man. He has won this contest every single time he has competed in it, except for three. Not only that, but the last time he did not win was in 2002, when he came in second place. However he made his return to this event in 2020, and uploaded the results to his YouTube channel.

The contest was made up of the following six events, that Big Z and other athletes completed during the event:

Unfortunately the video’s commentary is in Lithuanian, but you can tell that Big Z has a clear command over the competition. A few events here favored him quite well, with him being especially great at the log lift, holding the world record in this event. This would prove to be the case in the end too, as he not only won the contest, but came first in every event except for one. His single hiccup was a third place score during the Tire Flip & Loading Medley event.

This was the 16th time that Zydrunas Savickas was able to win the Lithuania’s Strongest Man. This is an absolutely insane accomplishment, and it just goes to show just how impressive of a strongman that he is, even at 45 years old. The fact that he won this contest with little struggle, and absolutely dominated the rest of the athletes who were there, shows that he is still one of the best in the world. While it is a shame that he is not competing in the upcoming Shaw Classic, it was still cool to see him get back to action here.