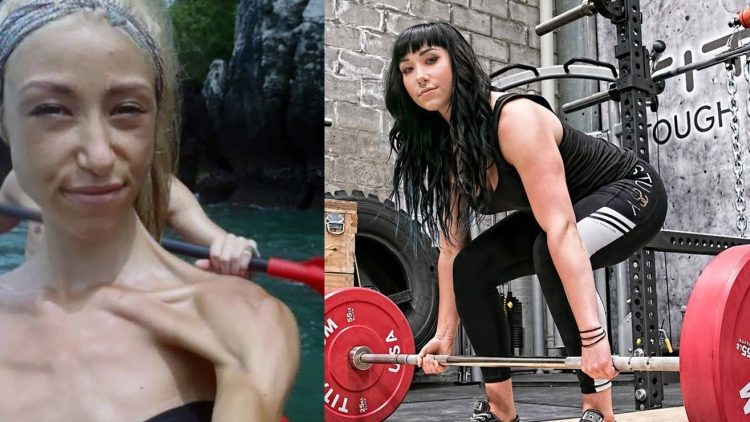 An anorexic woman who plummeted to four-and-a-half-stone and lived on 300 calories a day has reclaimed her health by developing a passion for Bodybuilding.

Sophie Gajnik, 24, from Melbourne, Australia, had always enjoyed sport from a young age but claims the pressure of university left little time for exercise, causing her to gain almost a stone in weight.

In a desperate bid to get back in shape, she started scrutinizing her diet and exercising until she collapsed in exhaustion.

Sophie’s strict regime quickly spiralled out of control and over the course of a year she’d gone from a healthy eight-and-a-half-stone to almost half that, developing severe medical conditions like liver damage and osteoporosis along the way.

But it wasn’t until her hair started falling out that she realized she needed to make a change.

Now, instead of eating lettuce and shunning fatty foods, Sophie polishes off chicken schnitzels and dozens of eggs in a bid to build muscle.

Today she weighs a healthy 10 stone and her new-found muscles mean she can squat an impressive 105kgs – the equivalent of almost four of her former anorexics selves.

Sophie said: “I was never convinced that I had anorexia, but how could I be? I was so hungry and delusional. I was dying.

“I meticulously counted every calorie and would only eat if I ‘earned’ it through exercise. Even then, I wouldn’t eat anything that was less than 90 percent water-based.

“I had no muscles and rarely could I get up in time to go to the bathroom.

“Usually I’d just wee myself and my mom or boyfriend at the time would have to clean up after me.

“I had long pink hair and if I ran my fingers through it, 50 hairs would come out. It was devastating.”

Growing up, sport was always Sophie’s favorite part about school and at home, her dad introduced her to swimming and tennis.

With two French parents, the family’s diet was rich in butter and Sophie would snack endlessly on Doritos and lollies.

As a child, she admitted she didn’t even know what a calorie was.

Her active lifestyle kept her skinny and at 5ft 5″ tall she hovered around eight stone.

But when it was time to enter university at 19, Sophie’s world began to change.

She said: “I decided to study psychology because I wanted to be a psychologist or a social worker, but I quickly realized that I couldn’t be those things because I’m too much of an emotional person.

“So after about a year, in December 2011, I canceled my course. My parents were quite concerned and told me I was ruining my life.

“They came to Australia from France not speaking any English, so I felt like a failure. Like garbage.

On top of that, I noticed I’d put on nearly a stone and my jeans were a little snug so I thought, at least I can get on top on this. This is something I can control.”