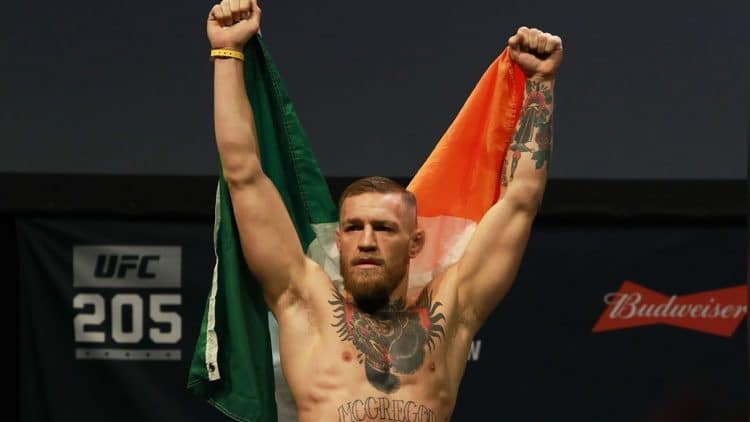 Last night, after the Cavaliers-Celtics playoff game on TNT, the NBA on TNT cast welcomed Dana White to the set to clear the air on the potential Conor McGregor-Floyd Mayweather fight.

White’s exact words were, “The McGregor side is done, I’m starting to work on the Mayweather side.” He did not guarantee that a deal was going to be made, but he did say, “If we can come to a deal with [Al] Haymon [Mayweather’s Advisor] and Mayweather, the fight is going to happen.”

McGregor confirmed the news on his website late Wednesday.
“It is an honor to sign this record-breaking deal alongside my partners Zuffa LLC, The Ultimate Fighting Championship and Paradigm Sports Management,” McGregor said. “The first and most important part of this historic contract has now officially been signed off on. Congratulations to all parties involved.”

“McGregor / Mayweather… Is it happening? Is it a myth? What’s going on?” –@SHAQ asks @danawhite the question on everyone's minds. #UFC pic.twitter.com/8v0gpngTdj

It was last reported that White was close to a deal with McGregor, but it’s a fact now, according to White. Another hold up of the fight was that McGregor has said that he’s not fighting until the birth of his son, which has happened.

McGregor also spoke his piece about signing his part of the deal on themaclife.com.

“The first, and most important, part of this historic contract has now officially been signed off on,” he said. “Congratulations to all parties involved. We now await Al Haymon and his boxer’s signature in the coming days.”

The details of either side of the deal haven’t been released, but in a recent clip he hinted at the possibility of making a whopping $300 million.

White has claimed in the past to be shooting for a fight date of September 16, which is now occupied by the Canelo Alvarez vs. Gennady Golovkin, according to foxsports.com.