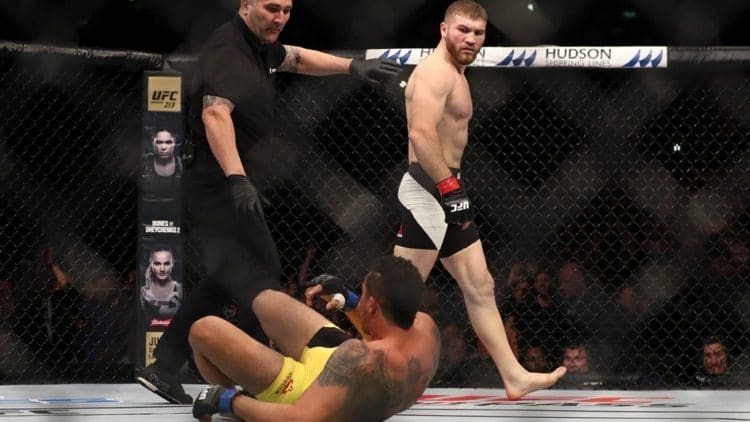 Ion Cutelaba added another first-round finish to his resume with a vicious knockout over Henrique da Silva at UFC Fight Night in New Zealand.

In a relatively weak division, the two light heavyweight prospects certainly wanted to make a statement, and Cutelaba took the opportunity.

At the weigh-ins yesterday, Cutelaba refused to shake his opponent’s hand and following with a faint to try and make his opponent flinch. It was from this moment, we knew the fight was going to be heated.

Tension or Theatrics? Ion Cutelaba wasn't warm and fuzzy with Henrique da Silva during pre-fight weigh-ins on Friday, let's see how it plays out on the main card TONIGHT at #UFCAuckland on FS1! Prelims start at 8pm ET, main card at 10pm ET!

The always animated Cutelaba is nicknamed “The Hulk” and true to his Marvel Comics moniker, he smashed the competition to get his second win inside the Octagon.

As soon as the fight started, Cutelaba was on the attack looking to land punches on da Silva, who was barely able to set his feet on a combination before he had punches being launched at his head in rapid fire succession.

Cutelaba connected with a left hook that staggered da Silva and sent him to the mat before the Moldavian light heavyweight followed him to the ground.

Ion Cutelaba talked big and hit bigger. The Hulk took out Frankenstein aka Henrique da Silva in less than :30! https://t.co/3jwKrYzP4T

Cutelaba started unloading with a series of right hands while pinning da Silva to the ground with his left and as it appeared as if each punch was just eating through the Brazilian’s attempted defense.

Finally, Cutelaba connected with a few more shots that saw da Silva go limp as the referee rushed in to stop the fight at 22 seconds into the first round.

Cutelaba commented afterward that it’s late back at home and he wanted to know that his daughter got to sleep on time so he had to finish this fight in a hurry.

Consider it mission accomplished as Cutelaba gets his 11th career first round finish.