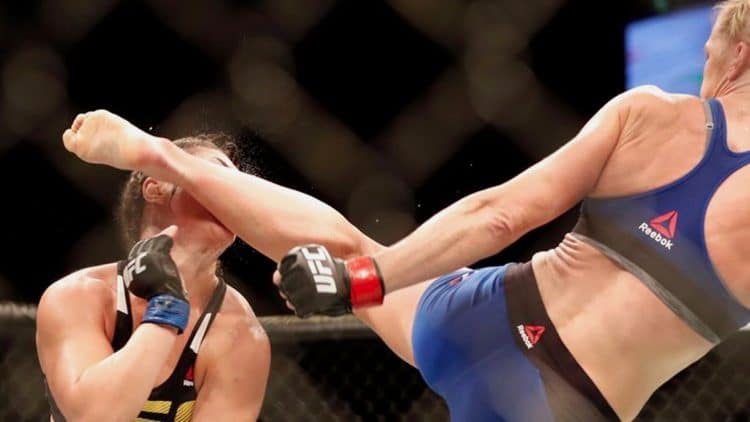 Holly Holm earned her first win in 19 months Saturday — and brought back memories of her most famous victory in doing so.

Holm (11-3) knocked out Bethe Correia (10-3-1) with a vicious left head kick at UFC Fight Night in Singapore. It was Holm’s first win since she stunned Ronda Rousey in a 2015 championship fight, which also ended with a high left kick.

The finish came at the 1:09 mark of the third round of what had been a very slow and tedious contest to that point. Correia fell backwards from the shot, and Holm rushed in with a follow-up left hand before referee Marc Goddard intervened.

“I know she can make it look messy, and I know we heard a lot of boos in the first round,” Holm said. “But I wanted to make it look as clean as possible. I’m going to enjoy this night right now, enjoy the victory. It’s been a year-and-a-half since I was able to do a backflip in here.”

The highlight reel kick was one of just 25 total strikes landed in the fight by Holm, according to Fightmetric. Usually known as a high-volume striker, Holm was extremely cautious against Correia — so much so that Goddard warned both fighters for timidity in the second round.

The action picked up slightly after that, but it remained a very uneventful fight right up until the big finish. For Holm, a former boxing and UFC champion, it is her eighth win by knockout in MMA.

Correia, of Brazil, referred to Holm as “overrated” in the buildup to the fight, but she showed a lot of respect for Holm’s striking once it began. She refused to go after Holm on the feet, as Rousey famously did, preferring to sit back and attempt to counter. She landed a handful of left hooks and right hands, but nothing too significant.

An Albuquerque, New Mexico, native training out of Jackson-Wink MMA, Holm is now 4-3 in the UFC. She won the 135-pound championship in her third appearance with the promotion, before falling into a three-fight skid against Miesha Tate, Valentina Shevchenko and Germaine de Randamie.

Cheat Training: How To Cheat During Your Workouts For Extra Muscle Mass