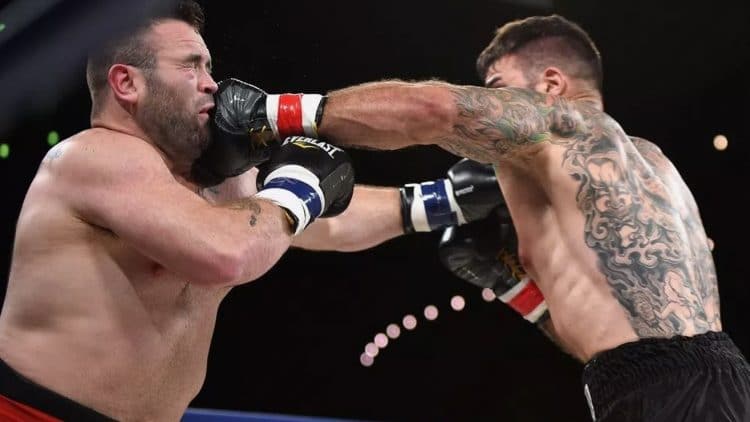 Former UFC heavyweight Tim Hague is in the hospital with a serious brain injury after suffering a knockout loss during a boxing match on Friday night.

The MMA world is in shock after learning former UFC fighter Tim Hague suffered a severe injury following a knockout loss in a boxing match in Edmonton. The fighter was initially reported as having passed earlier in the day, but his sister has updated friends and fans through social media saying that he is in critical condition. Some reports are stating he is brain dead.

Tim Hague's sister: "Tim is currently with all his immediate family. He is in critical condition. We ask for prayers and privacy." #yeg

Amidst the outpouring of support for the 33-year-old father of one, there are questions directed towards the competency of the Athletic Commission that put this fight in place.

After being knocked out multiple times in the last two years, Hague was still booked for the match against Adam Braidwood. He was knocked down twice in the first round and looked increasing confused after the second knockdown, even shooting for a takedown in a boxing match.

As the match against Braidwood continued, Hague would make it to his feet but would be stumbled multiple times (even touching his gloves to the canvas for a technical knockdown) before ultimately being knocked out. The referee and commission could be seen working on him almost immediately, and Hague would get up to the stool so the doctors could check him as Braidwood had his hand raised. You can even see Hague make his way out of the ring with some help from the ringside crew.

When the fighter got backstage, teammates knew something was wrong, Hague’s close friend Cody Krahn provided further details about the fighter’s condition in a Facebook post earlier today:

“As many of you know Tim suffered a severe knockout in his boxing match last night. Once we got Time backstage and with the doctor, we could tell that he needed to go to the hospital.

Tim is currently in a coma. He had to have brain surgery to relieve the pressure from his brain bleeding. But because we’re not family, they weren’t able to tell us much more.

I’ll be going back to the Royal Alex [hospital] this afternoon to see if his family will allow me to visit him.”

Many are calling out the Canadian boxing commission that cleared him to fight. Hague has a string of knockout losses in recent years and was fighting a strong up and coming boxer. He didn’t need any additional head trauma:

Just watched the full Tim Hague fight and it is brutal. Knocked down 5 times before the KO and was not defending himself. Shouldn't happen.

Those who knew the fighter are sharing thoughts and stories about the gentle giant on Twitter.

Just found out what happened to Tim Hague in Edmonton. Grew up with him in Alberta. Praying for him and his family right now. 🙏🏻

Hague was known for his hard-hitting style and was well-known in Canada following his perfect championship run in King of the Cage. His UFC run was up and down, most famously suffering a knockout at the hands of Todd Duffee in a then-fastest in history 7-second KO.

This dark day reminds fighters and fans how dangerous combat sports and especially accumulated head trauma can be. Tim Hague may not’ve been the biggest UFC star in the world, but this reverberates throughout the industry. It is unfortunate and could have been avoided with due diligence, even if it meant protecting a fighter from himself.