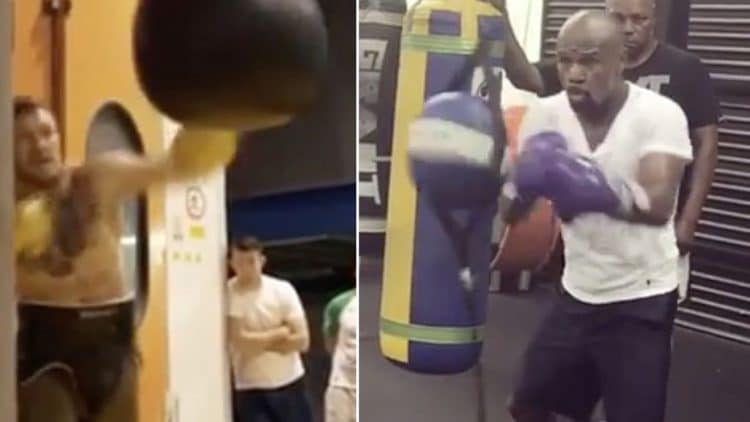 Floyd Mayweather and Conor McGregor will meet in Las Vegas in August after ending many months of speculation over whether they would fight.

Despite Conor McGregor fully believing he can beat Floyd Mayweather when the pair face off in Las Vegas, there’s only so far pre-fight chat can get you.

When the two enter the ring on August 26 mind games will no longer matter, only the better boxer will walk out victorious.

McGregor may well possess a terrific punching record inside the octagon, but it’s incomparable to Mayweather’s flawless 49-0 (26 KOs).

With just under two months to go until fight night, McGregor and Mayweather have both posted videos of their workouts – and the difference between the two is alarming

A prominent boxing account on Twitter and has helpfully spliced the two together to clearly illustrate the contrasting skills. A gulf in class couldn’t be finer epitomized than by watching the fighters’ training videos side by side.

Mayweather and McGregor training videos from today side by side. 😂 pic.twitter.com/cAJDPy9Dwn

Sure, McGregor could be at the end of his workout. Yes, he may be working on technique rather than speed. And of course, he’s undertaking a different drill to Mayweather.

But there still looks to be an obvious difference in boxing ability – especially if he’s selected that training clip to be in his highlight reel.

A number of notable boxing personalities including Gennady Golovkin and Oscar De La Hoya have already dismissed the fight as “a circus”.

“You’re going to ask McGregor to go inside a boxing ring, where he has no experience whatsoever,” said De La Hoya.

“He’s never laced up a glove. I call it a circus, I don’t think it’s fair for the sport of boxing.”

“What he needs to know is that I started boxing at five years old. I’m an Olympic gold medalist. I’m a 10-time world champion in six different weight classes.

“Yes, I was a bit older when I faced Mayweather but even I couldn’t beat him. So what makes McGregor think that he can go in there, in his very first professional fight, having really no experience in the professional ranks and beat Mayweather?

“It’s kind of far-fetched. I would tell McGregor that it’s the fight you don’t want to take your first time around. This is obviously all about money.

“This [Mayweather-McGregor] is not for fighters, but business,” said the 35-year-old Kazakh.

“I think people understand what is a true fight, a boxing fight, like mine with Canelo or a big show, maybe sometimes for people a funny show, like a circus show.

“This is the business. Conor with Floyd is not a boxing fight because Conor is not a boxer. Money fight OK, show fight OK.”

This is not to take anything away from McGregor – he’s a terrific MMA fighter. But we’re talking about boxing, an entirely different beast. Mayweather is a natural born boxer, and there are some things you just can’t teach.

Then again, an unorthodox boxing technique may work in McGregor’s favor. ‘Money’ certainly won’t have fought anyone quite like the Irishman before.