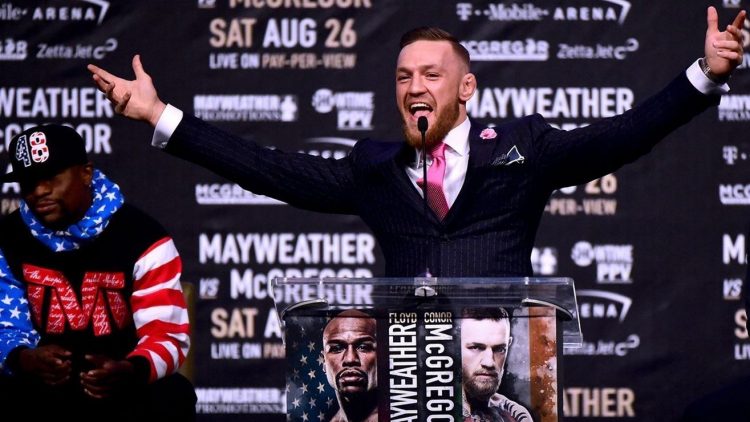 Conor McGregor and Floyd Mayweather held their first press conference on Tuesday for their much anticipated fight in Las Vegas on August 26th.

An artful trash-talker, McGregor wasted little time tearing into Mayweather’s clothes and troubles with the tax man. McGregor was dressed for the occasion, wearing a custom-made suit, and quickly chided Mayweather for his lackluster appearance saying, “He’s in a f—ing track suit. He can’t even afford a suit anymore.”

As Conor went on, he highlighted his own suit.

“How’s this suit look? It’s a cracker,” McGregor said. “An August-McGregor line, I’ve got my own line of suits coming out. If you zoom in on the pinstripe it says “F— you.”

Again the crowd laughed, for the line really felt like a joke.

But as we would quickly find out, McGregor was deadly serious.

McGregor has a known affinity for high-quality suits, with David Heil, CEO of David August, serving as his personal suit-maker. The Irish fighter has been known to drop as much as $50,000 on a set of suits at a time. Now, it appears that he really might have a line of suits coming out soon, complete with pinstripes that could get you kicked out of church.

McGregor and Mayweather will continue their media tour this week, all to build more interest for their fight coming up in August. At the very least, people will be keeping a sharp eye on McGregor’s wardrobe choice the next time the two meet.