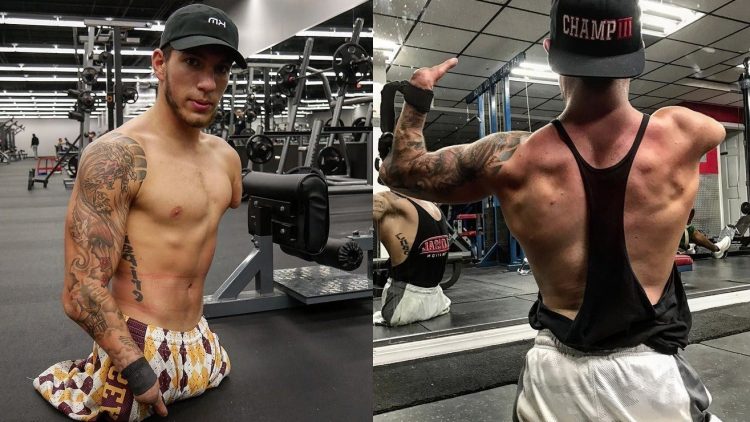 The 21-year-old man from Tampa, Florida has been filmed lifting a 152lb tire nine times, despite having only one arm and no legs.

Nick Santonastasso was born with Hanhart Syndrome, a genetic disorder which stunts the growth of limbs in babies, often leaving them with undeveloped organs.

The survival rate for those with the condition is 30 per cent.

No leg one arm tire flip

In high school, Santonastasso decided to amputate part of his shorter arm in order to allow him to use it more physically as a wrestler.

He went on to become the varsity wrestler of his school in Bayville, New Jersey and has since launched a successful career as a bodybuilder and fitness model.

In a video titled ‘My Life Story’ uploaded to his YouTube channel – where he has close to 50,000 subscribers – he claims that he is one of 12 people to have ever been born with the disorder. “Of those 12, eight of them are dead”, he explains.

The young bodybuilder first gained attention for uploading prank videos to YouTube, in which he scared members of the public at a gas station by dressing up as a zombie and chasing them.

Videos of Santonastasso swimming, skateboarding and wrestling have also proven popular with viewers, with his videos racking up an impressive 3 million views in total.

YouTube isn’t the only social platform where the young fitness pioneer is garnering attention.

He has over 200k followers on Instagram where, like most other fitness influences, he uploads a mixture of selfies, gym routines, and protein recommendations. The key difference being that, unlike any other social media star, he is racking up the likes without the advantage of a full set of limbs.

He describes himself as a fitness athlete, model and motivational speaker on the website named Raw Mettle Motivations, the fitness company for which Santonastasso acts as CEO.

He has worked with Reebok, appeared on The Today Show and worked with fellow athletes Conor McGregor and JJ Watt.

Eddie Alvarez: “If You Don’t Think Conor Can Knock This Guy Out, You’re An Idiot”