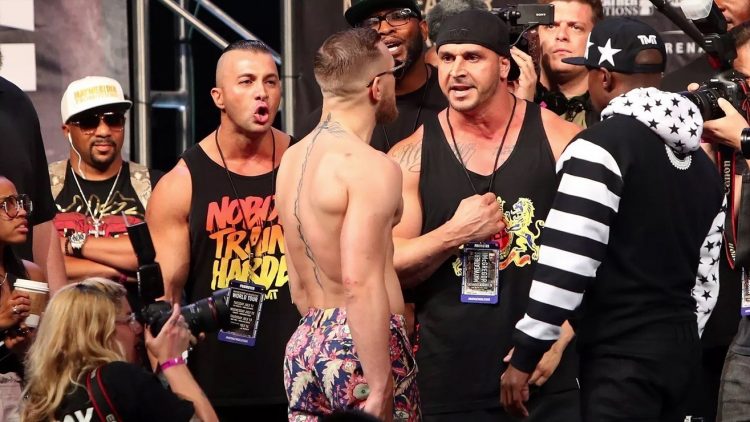 After Conor McGregor called Floyd Mayweather’s bodyguards “Juice Heads”, one is ready to take the UFC lightweight champion to the task.

Things got a bit hostile during the official Floyd Mayweather vs. Conor McGregor world tour, but it was the trip to Barclays Center in Brooklyn, New York where the train really began to go off the rails.

Between Mayweather making it rain dollar bills, to McGregor’s “polar bear” fur coat and of course, the near confrontation between McGregor’s team and Mayweather’s bodyguards, things were certainly heading in the wrong direction in the promotion of the August 26 mega-fight.

During the visit to Brooklyn, the UFC lightweight champion began accusing the bodyguards of Mayweather of taking steroids, more specifically, calling them “Juice Heads.” Greg La Rosa, one of those bodyguards is willing to put his money where his mouth is to prove McGregor wrong.

“He came back and said some stuff to me like, you’re on juice,’ and I told him right there, I said, ‘no, never’, La Rosa said while appearing on Submission Radio. “I said, ‘I’m not.’ I said, ‘I’ll do a USADA test right now and I’ll bet you a hundred thousand dollars that I’m not’, and he said, ‘yeah right, yeah right,’ and I said, ‘I’ll take it right now, I’ll take the blood right after the show,’ and it kind of got him like, ‘no way’ and he said, I think he said something along the lines of, ‘this is a real body,’ or something. And then I just told him, I said, ‘you know what, when you’re standing next to me’, I said, ‘put on a shirt cause you’re embarrassing yourself standing next to me.’ I figured it would just rattle him up a little bit. That’s all it is for me.”

La Rosa also believes that McGregor’s opportunity to get inside of Mayweather’s head throughout the week of the world tour fell short. Many believed this was McGregor’s chance to rattle the 49-0 Mayweather, to make him so angry and irate, that “Money” would begin to fight outside of himself. La Rosa thinks the turning point came to life during the final stop in London when McGregor gave Mayweather a head rub.

“I believe the turning point of what showed that he couldn’t get in his head is at the point when he touched his head in London,” La Rosa said. “To me, that showed a sign of weakness in Conor because basically, the touch, you’re not supposed to be touching the other guy obviously, and I believe that touch was to try to bring something out of Floyd and he was basically saying, to me anyway, that I can’t do with words, I can’t do with actions, I need to try to do something else here. And even when he touched him, Floyd wasn’t even paying attention. He was on his phone and was just laughing at him, just laughing. He was talking to other people while Conor was doing his bit and I think that was really getting to Conor.”

The highly anticipated spectacle fight between Mayweather and McGregor will take place at T-Mobile Arena in Las Vegas, Nevada on August 26.