Eddie Alvarez: “If You Don’t Think Conor Can Knock This Guy Out, You’re An Idiot” 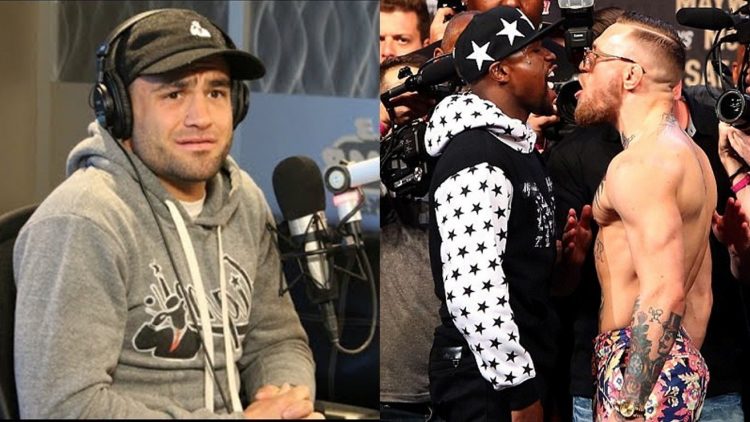 The UFC’s former lightweight champion Eddie Alvarez recently gave his own opinion on the hot topic that is Floyd Mayweather versus Conor McGregor and despite his well-publicised history with everyone’s favorite Irishman, his views on the subject were fair and balanced, all things considered.

While most observers are a bit skeptical about McGregor’s chances (to say the least), the man who’s been on the receiving end of the Dubliner’s blows isn’t one of the skeptics.

The pair met last November in what was a historic event for the UFC, with the event taking place Madison Square Garden – the UFC was in New York for the first time in their history. (MMA was previously banned in the state of New York)

McGregor became the first person in UFC history to hold two belts simultaneously when he defeated the Philadelphia born fighter by TKO in the second round.

In what was portrayed as McGregor’s toughest fight at that time, the Irishman dispatched Alvarez with relative ease, and now the former lightweight champion has been talking up his former foe’s chances on ESPN’s Five Rounds Podcast,

“Conor has about three or four rounds to get this done, and when this comes down to being a technical boxing match, which is usually around round four, between round five to 12, it usually goes to the more technical boxer.

I think within those four rounds, if you don’t think Conor can knock this guy out, you’re an idiot or you just don’t know fighting because it can very well happen.

If he doesn’t get it done by then, it could look very one-sided. The technical boxing of Floyd Mayweather is enough to make it look one-sided for him. But Conor, there is a real chance he can put him away. “

Of course, Conor has now moved far from the UFC’s 155lb division with this latest endeavor but despite this, Alvarez still holds out hope that he can one day earn the opportunity to right the wrongs in performance at UFC 205 and throw down with McGregor in a rematch, even if he realises it will probably never happen.

It’s a rare show of support for McGregor’s chances in the fight, and it comes from a very reliable source in someone that knows exactly what he can do. It’s worth noting though that even Alvarez is only suggesting that this COULD happen, not that it will. If Conor can’t achieve a knockout early, he has very little chance.

The interview can be listened to in full below and though Alvarez touches on many subjects throughout when listened to as a whole, it gives a good sense of the man behind the fighter and how he has been able to move on from his setback like the champion he i

With the trashy press conferences dispensed with, all we can look forward to now is the fight on August 26 in the T Mobile Arena, Las Vegas.