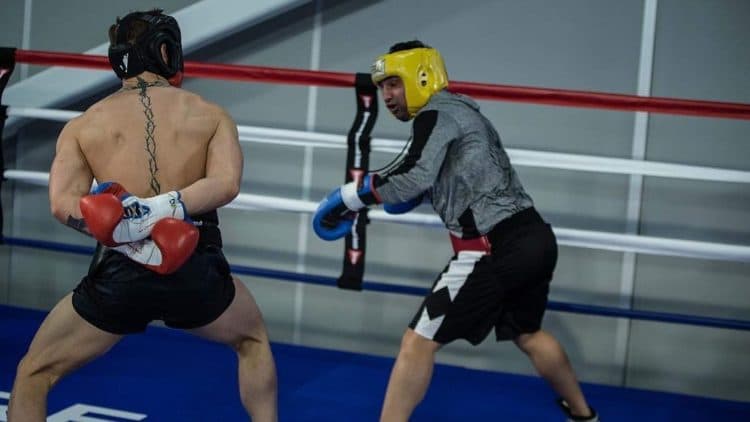 Those thinking that Conor McGregor and his team of coaches are just winging it heading into his massive boxing match against Floyd Mayweather Jr. are mistaken, according to Paulie Malignaggi, McGregor’s newest boxing sparring partner.

Malignaggi said Friday night in an interview with ESPN’s Brett Okamoto that pundits who might think McGregor is treating this as just a money grab are very wrong.

They say I've got no hands. pic.twitter.com/FJfvj5qjKi

Malignaggi, the former WBA welterweight champion, said he and McGregor sparred Thursday night for eight rounds in Las Vegas. It was supposed to go six, but it went well, he said, and McGregor asked him to go two more. At the end of the sparring session, Malignaggi said McGregor was “cordial” — the two talked trash leading into this week — and asked him to stay on for the remainder of training camp. Malignaggi will oblige.

Paulie Malignaggi Discusses Sparring with Conor McGregor & Trash Talk”It was educational,” said Malignaggi, who added that he had no expectations coming in. “There was a lot of trash talking, which me and him both known to have a little bit. Like I said, we did eight good rounds of work. It was physical work and Conor is coming along.”

Malignaggi, 36, said that of course McGregor, the UFC lightweight champion, has his own style coming from mixed martial arts and there was a certain awkwardness to the sparring. But not in a bad way or one necessarily disadvantageous to McGregor. There was plenty of yapping, though, Malignaggi said.

“In a championship camp, the sparring is intense, so I didn’t expect to go in there and it be a picnic,” Malignaggi said. “He’s a competitor, I’m a competitor. We went in there and there was a lot of trash talking right away. There was a lot of fighting right away. In the end, you look back on it was kind of fun. I don’t have everybody that can match my trash talking, but Conor definitely can. So it was making it a lot of fun.”

When asked about McGregor’s trademark left hand, the one that has knocked out the likes of Jose Aldo and Eddie Alvarez in the UFC, Malignaggi acknowledged that he has “pop” in it and credited him as such. But the Brooklyn native, who has been a pro boxer since 2001, said McGregor will need to diversify to get ready for Mayweather on Aug. 26 in Las Vegas.

“You come into the situation already knowing Conor has a big left hand,” Malignaggi said of Mayweather’s likely mindset. “So if you’re fighting Conor, you’re probably gonna prepare for that left hand. So obviously Conor is working on other things besides the left hand, so that there could be a surprise element to it, too.”

After the sparring was over, Malignaggi said he was pleased to talk to McGregor on a different level from their previous trash talk. He said he’ll be happy to help McGregor out for the next month heading into the big bout at T-Mobile Arena. Malignaggi said McGregor’s coaches are “winners” and have that kind of mentality. A strategy for Mayweather, Malignaggi seemed to imply, has already been implemented.

“Without giving away too much, he’s effective at what he’s doing,” Malignaggi said of McGregor said. “There’s a method behind the madness. He and his team are working at it. I’m sure it’ll be entertaining and fun.”

WATCH: The 5 Exercise Swaps You NEED to Make (RIGHT NOW!!)