WATCH: The ‘Most Vicious Knockout You Will Ever See’ Dana White Says 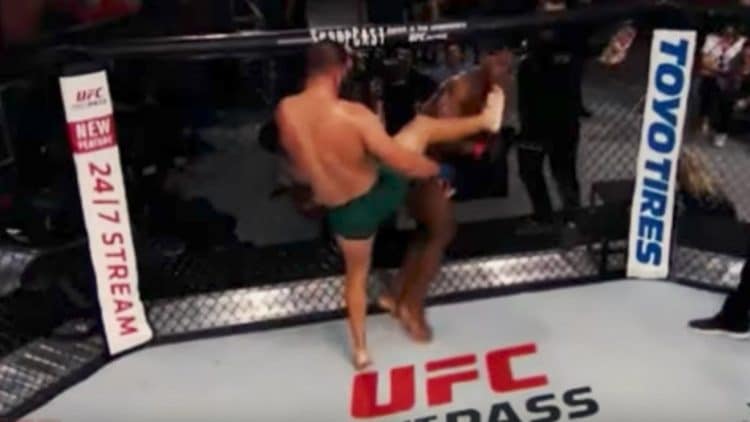 Dana White has seen his share of the most brutal knockouts, but this stunning kick from Julian Marquez during an installment of the Contender Series may be the most vicious you’ll see—and that’s according to UFC president himself.

Opponent Phil Hawes used his potent wrestling to take the first round of their middleweight contest, so Marquez came out swinging in the second. He hurt Hawes badly, Marquez landed a barrage of punches that sent Hawes staggering and after the two tumbled to the mat it looked like Marquez might score the finish via ground-and-pound or submission.

Instead, Hawes fought his way up, a decision he would soon regret. Marquez lined up a nasty head kick that caught Hawes right on the chin, sending him plummeting face down onto the canvas.

Check out White’s reaction to the head-smashing kick that sealed the win for Marquez and earned him an immediate UFC contract.

“Can I kick it? Yes, you can!” an excited Snoop Dogg said on color commentary.

A man on a mission. Marquez entered the evening on a four-fight win streak with his last three fights all ending by knockout or TKO. And if this fight is any indication, look for the hard-hitting middleweight to add a few more KOs to his resume in spectacular fashion.

As for his thoughts on the fantastic finish that brought the UFC president out of his seat? “I didn’t fight for Dana White—I fought for myself,” Marquez said after the fight. So much for kissing up to the boss.

Unsurprisingly, Marquez was one of the competitors offered a UFC contract after Tuesday’s fights.

WATCH: Some Of The Freakiest Bicep Peaks Ever