Wait, what the hell is Conor McGregor doing in the streets of New York City? A Conor McGregor impersonator caused mayhem in Times Square over the weekend that required assistance from the NYPD.

The man most people seemed to believe was McGregor was Islam Badurgov, a professional street workout athlete from Kazakhstan who bears a striking resemblance to the UFC lightweight champion from Ireland.

Badurgov first pulled off his McGregor stunt back in July when he displayed his strength at Muscle Beach in Venice, a place where the real McGregor previously has worked out.

After executing the trickery in Venice, which had fans coming up to him at every turn and asking for photos, he decided to take his talents to Times Square.

Badurgov has perfected the McGregor imitation. It was so spot on that even when people got face-to-face with the street athlete, they still had no idea it was an impersonator. While only inches from Badurgov’s face, fans continued to call him the champ and wished him luck in his Aug. 26 fight against Floyd Mayweather.

Who could blame them? Badurgov’s outfit was on point, including the haircut, facial hair, open button-down shirt, sunglasses, and (fake) tattoos.

Not only were fans in New York completely hoodwinked, but a number of NYPD officers also were fooled.

In the video that Badurgov posted to YouTube and his Instagram account from the Times Square scene, you can see multiple police officers shaking his hand and even posing for a video with him.

The fake McGregor caused such a commotion in Times Square that more NYPD officers were required to help clear a path for the car he was riding in.

So, a fair warning: just because you see someone who looks exactly like Conor McGregor, it does not mean it really is him.

The only way to spot the difference between the street athlete and the UFC champ is their muscles. Badurgov looks like he would be able to beat McGregor in a weight lifting contest, but probably not in the cage.

WATCH: Gregg Valentino On What ‘Actually’ Happened to Rich Piana! 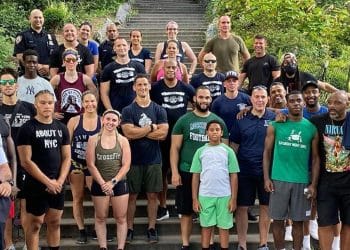