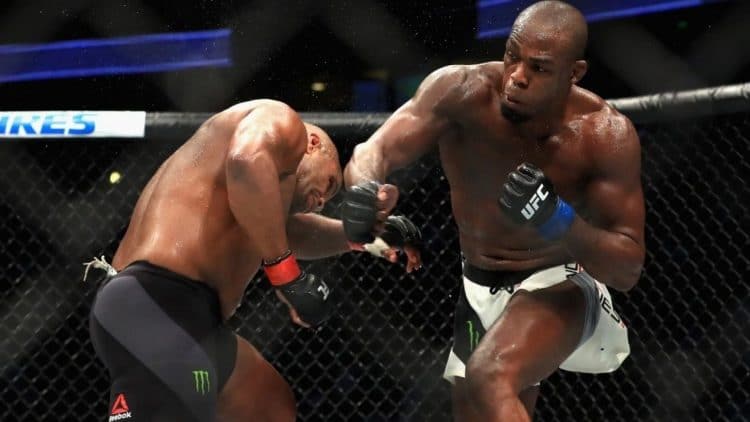 White denied that the UFC has stripped Jones of the title, as TMZ reported.

CONFIRMED with Dana White: Jon Jones failed drug test at UFC 214. Per White, he hasn't been formally stripped of title yet. Wow.

According to a statement released Tuesday, the UFC said Jon Jones’ failed test stemmed from an in-competition sample that was collected at his weigh-in July 28, the day before his fight against Cormier.

“Under the UFC Anti-Doping Policy, there is a full and fair legal process that is afforded to all athletes before any sanctions are imposed. The California State Athletic Commission (CSAC) also retains jurisdiction over this matter as the sample collection was performed the day before Jones’ bout at UFC 214 in Anaheim, CA, and USADA will work to ensure that the CSAC has the necessary information to determine its proper judgment of Jones’ potential anti-doping violation.”

Dana White on Jon Jones, "This might be the end of his career." pic.twitter.com/fu9uGyrgLc

“I always know what to say. I don’t know what to say about this one,” White told reporters Tuesday. “These things never come at a good time. They’re always bad, especially with somebody like Jon Jones. In my opinion, he’s the best to ever do it. That makes it even more unfortunate.”

“We are all at a complete loss for words right now. Jon, his trainers, his nutritionists and his entire camp have worked tirelessly and meticulously the past 12 months to avoid this exact situation,” the statement read.”

“We are having the samples tested again to determine the validity or source of contamination. Jon is crushed by this news and we are doing whatever we can as a team, to support him.”

This is the second time Jones has failed a drug test. He also tested positive for banned substances in 2016 before UFC 200 and was pulled from the main event. Jones later told the U.S. Anti-Doping Agency that failed test was the result of an unmarked sexual enhancement pill.

Jones (23-1) was outspoken about alleged drug use in the lead-up to his second defeat of Cormier, with social media posts like this now coming back to haunt him:

Daniel says the only reason I defeated him the first time is because I must have been on steroids, wonder what his excuse will be this time pic.twitter.com/HMCFQBoBR4

If the results of the failed test hold, Jones’ UFC 214 win over Cormier will be changed to a no-contest. Cormier, whose only two career losses have come against Jones, said Tuesday night that news of Jones’ failed test was “very emotional.”

“We as athletes are entitled to due process, and I will refrain from saying much more until I know exactly what happened.

“In my mind, on July 29, I competed and I lost. I thought Jon Jones was the better man that day. I don’t know what to think anymore. I can’t believe we are going through all of this again. We will see what happens next.

“Thank you to all my fans who have supported me during this dark time. I love you all very much.”

Speaking at a press conference on Wednesday afternoon, White struggled to find the words to express what he was feeling.

Jones’ teammate at JacksonWink MMA Frank Lester to his friend’s defense, calling it a set-up.

“I was just at dinner sitting next to Jon Jones when he got the phone call about this failed drug test. Supposedly the story is between weigh ins and fights night he took an oral steroid. Which makes zero sense since it wouldn’t do anything at all for Jon to do so. It takes weeks for steroids to build up in your system to be a performance enhancer,” Lester wrote on Facebook.

“Jon was devastated, to say the least. This is a setup, straight up, no athlete would test clean his entire fight camp, and then randomly take some cheap f***ing oral steroid betweens weigh ins and fight night knowing he would be tested once he got done the fighting. This is a straight set up. They are trying to ruin this kid’s life.”

“It makes no sense and Jon wouldn’t do it. Let’s see what happens with all of this but I truly believe Jon is innocent & I hope that all of you will give him a fair chance before you send hateful judgments his way.”