Underdogs & sports go hand-in-hand like gloves go hand-to-face, and these two perfect matches made for one of the best stories of the year.

Luis Felipe Alvim didn’t even have tickets to the fight when he arrived in the Brazilian city of Juiz de Fora. He and his girlfriend baked brownies to sell outside the venue, in an attempt to raise the money.

According to MMA Fighting, Luis Felipe Alvim won the Juiz de Fora Fight welterweight championship when fighters backed out of a match, cracking the window on Alvim’s opportunity.

Alvim – a black belt in jiu-jitsu but a complete novice in the MMA world – offered to step in, but found a replacement had already been found.

Again, though, that replacement backed out with 40 minutes left until the fight, so the 22-year-old got the call. A series of fortunate (for him) events, he landed himself a match.

Once Alvim MMA fighter got in the cage, it was tough early on, with his challenger landing some brutal blows and aiming to finish the fight quickly before getting caught in a submission.

Within moments, the welterweight champion tapped out, and the MMA fan was given the title.

Speaking on his decision to fight, he said:

“He took me down and landed some heavy shots, and I though ‘oh sh*t, what the f*ck am I doing here?’” Alvim said. “When I locked the triangle I thought to myself, ‘sh*t, I’ll catch him.’ I asked God ‘please, don’t let this round end,’ and he tapped.”

The crowd went nuts with his win. After receiving the belt, Alvim proposed to his girlfriend. 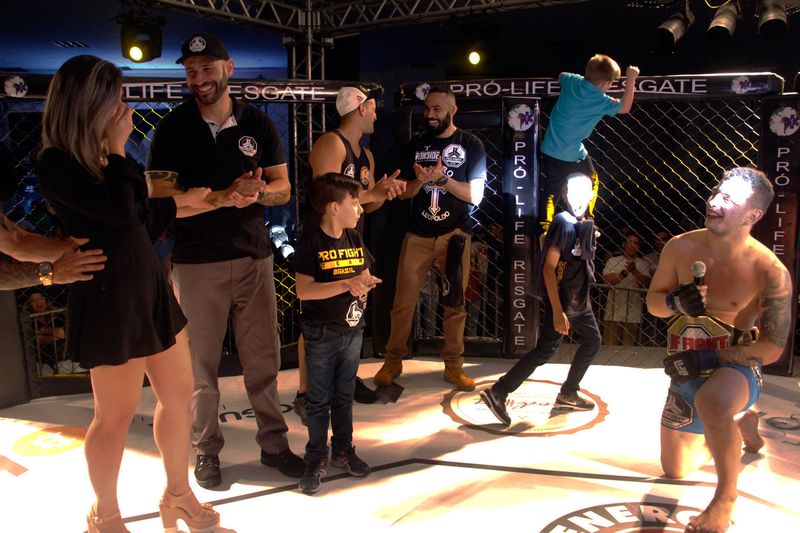 “I showed my girlfriend the trailer of the movie Troy yesterday, in which this kid tells Achilles he’d never fight a giant like Achilles was about to do, and Achilles says ‘that’s why your name won’t be remembered.’ That stuck in my mind.”