Chad Penson becomes the first man to lift 881lb squat at the 2021 Kern US Open by the World Raw Powerlifting Federation (WRPF). He also totaled 11 times his bodyweight. 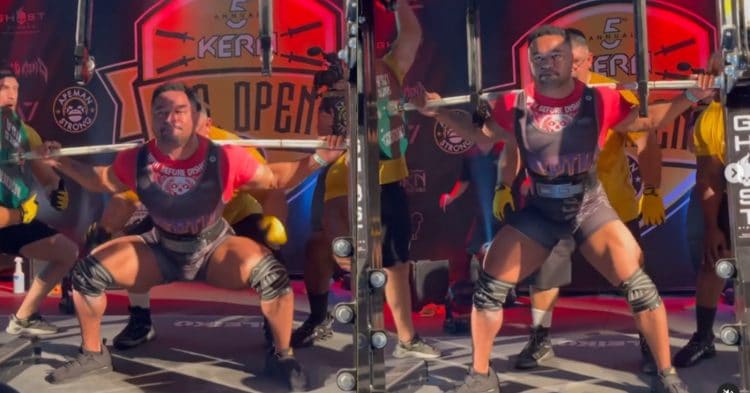 The 2021 Kern US Open sanctioned by the World Raw Powerlifting Federation (WRPF) took place on April 24, 2021, and was expected to be the home of new world records. The first record of the event was taken by powerlifter Chad Penson, who became the first man in the 90kg-weight-class to crush a 400kg/881lb squat. He performed the squat in the Raw With Wraps category.

Penson also totaled 997.5kg or 2,199 lbs which was 11 times his bodyweight and absolutely insane. John Haack previously held the total record of 970 kg going in but Penson topped it although the former still boasts the heaviest bench press in the category at 260kg/573 lbs.

During his performance, Chad Penson broke the same record two times. Prior to the 400kg lift, Chad performed a 393kg/866lb squat which was only one-half of a kilogram, or, roughly one pound heavier than the previous record.

Today saw a record that Chad Penson predicted some time ago. After a training session on April 14, Penson posted to his followers to “stay tuned” that “monsters are coming to play.” He also said, “Records will be taken.”

The previous record was held by John Haack, the current total world record holder in the same weight class. His world record total is 967.5kg/2,133lb, with a 337.5kg/744lb squat included.

This current record for Chad Penson is 60 kg higher than his last squat. In August 2019 at the Boss of Bosses 6 competition, he lifted 340kg.

Austin Dodd was the first record holder. In November 2020 at the Raw Powerlifting Syndicate’s Raw and Uncut event he lifted 392.5kg.

It was a record he would only hold for just a little over five months before Chad Penson hit the weights. Austin Dodd was not at the Kern US Open this year.

Today’s record-setting competition for Penson was his fourteenth competition. His first meet was in 2012 at the USAPL Raw Nationals at the age of 20. Over the next 13 competitions including today’s, he was on the podium seven times and has not placed lower than second place after his first competition.

At the 2021 Kern US Open, Penson lifted three times. His first was a 370kg lift which was effortless. His second lift which set the record included fireworks and a loss of music and light power. His lift could still be seen, however, the live stream was unavailable to supporters for some time. For the third lift at 400kg, the lighting was fine.