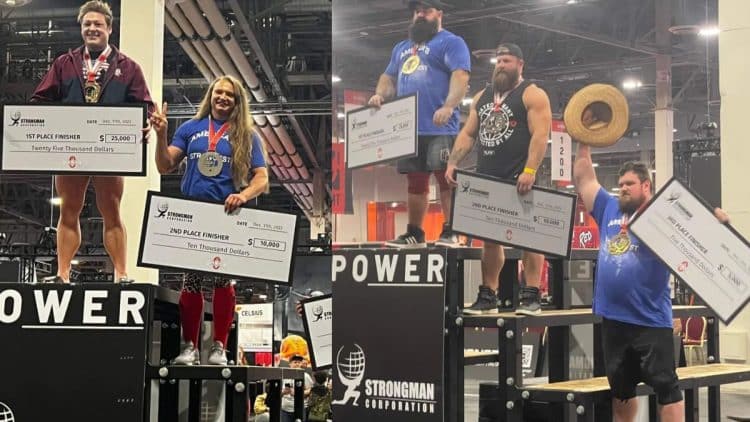 The 2022 America’s Strongest Man & Woman contest took place on December 16-17 in Las Vegas, Nevada. It featured 13 of America’s greatest Strongman athletes in the men’s division, as well as five elite Strongwomen in the women’s division. In the end, Bobby Thompson and Victoria Long emerged victorious in their respective divisions.

Both the men’s and women’s division featured five events, with the only thing separating them being the weight of the implements. To determine the best man and woman, the events were carefully chosen to test their all-around ability. Thompson won two events, and added three more top five finishes to clinch the title. However, Victoria Long put on a flawless performance, having won all five events. Both champions earned prizes of $25,000.

The 2022 America’s Strongest Man & Woman contest began with a simple, but classical Strongman event. The athletes aimed to lift as heavy as possible, which determined their placing.

This event was like a blessing for Bobby Thompson, since he has been one of the greatest Log Lifters in the world for many years now. The other overall winner, Victoria Long, also won the log lift event in her division.

Three progressively heavier trap bars were placed in front of the athletes. Upon completing all three bars, the athletes continued deadlifting the third trap bar for as many reps as possible.

Bobby Thompson won his second consecutive event of the competition, having locked out 11 repetitions. On the other side, Victoria Long had an identical start to Thompson’s, having also won her second event with 15 repetitions.

Following the deadlift medley, the 2022 America’s Strongest Man & Woman featured a Carry Medley as well. The athletes first had to carry a sack, then Farmer’s implements, and finish the event with a duck walk.

Roy Orrantia won the third event of the 2022 America’s Strongest Man, as he was the only man to finish all three implements in less than 30 seconds. As for the women, Victoria Long continued her perfect streak with a victory in event three.

The penultimate event of the 2022 America’s Strongest Man & Woman contest saw the athletes take on the Power Stairs. They had to lift three progressively heavier implements, each up a flight of four stairs.

Tyler Cotton won the event in what seemed to be the most crucial moment of his competition. Having scored 13 points, Tyler put himself in a position to win a silver medal overall. Heading over to the women’s division, Victoria Long continued dominating and secured another event win. This relieved her of any pressure on the final event.

The 2022 America’s Strongest Man & Woman contest wrapped up in the same manner in which it began. The only difference being that a Sandbag Load was used instead of a Log Lift. So, the athletes had to lift and place a Sandbag of their choice, with the heaviest one winning.

A three-way tie for first place ensued in the men’s division, as Austin Andrade, Trey Mitchell, and Jasper Haney all succeeded in lifting the 209-kilogram sandbag. However, a tie was not an option for Victoria Long, who came out victorious in the final event and finished the competition with max points.

The past weekend has certainly been a delight for any fitness and strength sports enthusiasts, as America’s Strongest Man & Woman took place at the same time as 2022 Mr. Olympia. It would be hard to decide which was more entertaining to watch, but Bobby Thompson and Victoria Long certainly put on one of the best displays of the year.

Dennis James: ‘Goal Was for Big Ramy to Come at His Best, I Don’t Know What Happened’ at 2022 Mr. Olympia