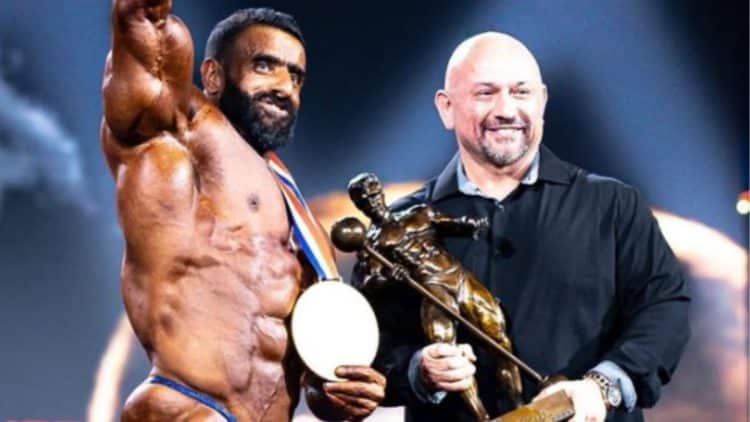 Iran’s Hadi Choopan reached the pinnacle of his career on Saturday after capturing his first Mr. Olympia title. In a recent Instagram post, Choopan touched on the sacrifices it took to earn gold and reflected on the historic victory.

Choopan, once a 212 competitor in 2018, continues to showcase improvements in the Men’s Open division. After making the switch, it didn’t take long for ‘The Persian Wolf’ to start winning shows in the new category. Choopan won the 2019 Vancouver Pro and finished third in his Mr. Olympia debut that same year.

In 2020, Choopan’s sophomore appearance at Mr. Olympia resulted in fourth place. That was his lowest finish on an Olympia stage, but he’s since made up for it. At last year’s 2021 contest, Choopan was third, behind Mamdouh ‘Big Ramy’ Elssbiay as well as Brandon Curry.

Bodybuilding legend Phil Heath warned all year that Big Ramy could be dethroned by Hadi Choopan at 2022 Olympia if he entered the show slipping or off. And many believe that’s exactly what happened. Ramy’s close friend/training partner Dennis James opened up after the loss and said he has no idea what happened. Nevertheless, it’s Choopan’s throne now, and the newly crowned champion took to Instagram to share his thoughts on the recent victory.

On Sunday, December 19, Choopan looked back on the adversity he faced to make history by becoming the first Iranian-born Mr. Olympia champion. During his post-show speech, Choopan dedicated the victory to the women of Iran.

Hadi’s post prompted his trainer Hany Rambod and a number of bodybuilders to congratulate him in the comment section. 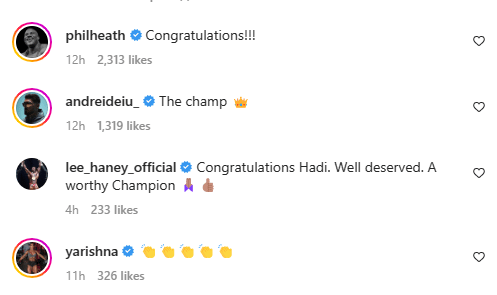 In preparation for the show, Hadi Choopan was led by his coach Rambod. At 2022 Olympia, Rambod’s athletes dominated. In addition to Choopan claiming Men’s Open gold, Chris Bumstead, the now-four-time Classic Physique Olympia, closed the show with one of his most conditioned packages ever. Rambod also worked with Mr. Olympia runner-up Derek Lunsford.

Choopan’s 2022 Olympia victory reverberated across the sport, especially because a pair of 212 bodybuilders walked away from Mr. Olympia in first and second, respectively. New Jersey’s Nick Walker rounded out the top three, and took home the People’s Champ Award, the same honor Choopan received when he finished third at 2021 Olympia last year.

With Brandon Curry and Big Ramy placing fourth and fifth, the entire Men’s Open pecking order has changed. In the aftermath, Hadi Choopan promised Phil Heath that he would tie his record of seven Sandow trophies before he steps away.

Choopan won’t forget the 23 years of pain, suffering, sorrow, and slander that led to his first Olympia title. Given the consistency he’s shown at the highest level in the sport, it’s going to take a massive effort to take out the new champ.