The 2023 Arnold Strongwoman Classic will also feature an increased total prize purse, which will now be $75,000. 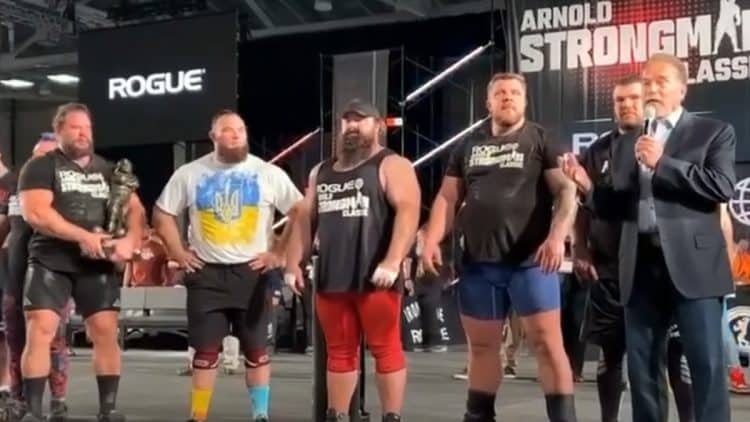 The 2023 Arnold Strongman Classic will take place on March 3-4 in Columbus, Ohio. A list of the competitors and events for the Strongman and Strongwoman Classic competitions has been released. Both divisions will compete on the same weekend and will take part in the same events.

Interestingly enough, the reigning champion in the Strongman division, Martins Licis, will not be coming back to defend his title in 2023. So, ten of the strongest men on earth will be battling to become the new victor. On the other hand, the Strongwoman champion, Victoria Long, is coming back in the hopes of getting another first-place finish.

A Look At The Strongman Lineup

Judging from the performances in the last two years, it is hard to look past Tom Stoltman when debating who the new champion will be. Tom has won the 2021 & 2022 World’s Strongest Man contests, as well as the 2022 Britain’s Strongest Man competition, so he definitely knows how to come out on top.

Tom will not have to look far to find his first serious opponent, as his brother Luke Stoltman, the 2021 Europe’s Strongest Man, will also be competing. Apart from Luke, another fierce competitor will be Trey Mitchell, who made a name for himself by winning two previous editions of the prestigious Shaw Classic contest.

The 2023 Arnold Strongman Classic will not lack young talent, as three incredible youngsters will be appearing in the show. The most notable seems to be Mitchell Hooper who has made his debut in Strongman just a few months ago. Since then, Mitchell has won two prestigious competitions and added another four podium finishes.

Pavlo Nakonechnyy is another up-and-coming athlete who will pose a threat to everyone else, as he won the 2022 Giants Live World Open earlier this year. Finally, what excites most fans of the sport, is a comeback from injury of Mateusz Kieliszkowski, who already has 10 professional victories under his name at the age of only 29-years-old.

A Look At The Strongwoman Lineup

Victoria Long will have a much harder competition at the 2023 Around Strongwoman Classic, since the lineup consists of purely world-class athletes.

It is hard to single out any one of the other nine competitors, since everyone has achieved so much in their career already. One athlete that is in particularly great shape is Andrea Thompson, as she recently set a new Log Lift World Record.

Donna Moore is another one of the favorites, having been the World’s Strongest Woman three times throughout her career.

What surprised many is Tamara Walcott’s name on the list, as she has found her fame in the sport of powerlifting. She holds numerous World Records and her appearance at the 2023 Arnold Strongwoman Classic will be her debut in Pro Strongwoman.

“We’ve increased the total purse to a record $75,000 for 2023’s competition, and can’t wait to see this world class lineup of athletes battle it out in Columbus!”

As seen in the statement above, Strongwoman athletes will be delighted to hear that their prize purse has been raised to $75,000. So, that will definitely make for even fiercer and more exciting performances.