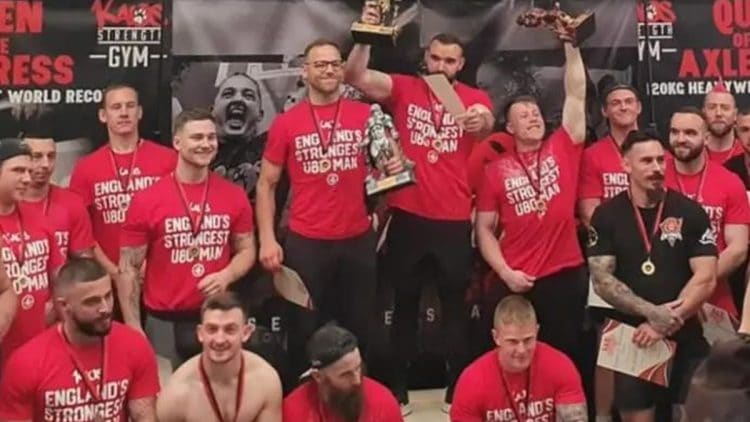 The 2022 England’s Strongest Man U80KG took place on June 12, 2022, in the Kaos Strength Gym, Preston. The under 80-kilogram weight class had one of the greatest lineups ever, with competitors facing off across five brutal events. The top eight finishers from the show qualified for the upcoming 2022 U80KG Britain’s Strongest Man.

A standout performer at the 2022 England’s Strongest Man U80KG was Tim Dalglish, as he delivered an incredible performance. He was followed by Josh Lancaster in second place, and Richard Molnar, who rounded up the podium.

The 2022 England’s Strongest Man U80KG showcased why this weight class is one of the most exciting within the sport of Strongman. The competitors were relatively light compared to the usual Strongman athletes yet still performed amazing feats with their lifts exceeding their bodyweight.

Event One — Axle Clean And Press

The 2022 England’s Strongest Man U80KG started with a massive 120-kilogram (264.5-pound) axle clean and press for reps. As athletes were pressing at least 1.5x their bodyweight, so every performance was bound to be impressive. Tommy Chivers won the event with a huge six repetitions. While five athletes shared the second place, as Tom Hulme, Josh Lancaster, Tim Daglish, Lewis Blackwood, and Matt Nice all performed four reps.

The 255-kilogram (562.2-pound) 15″ axle for reps was the second event. Richard Molnar won this event with a huge 18 reps without a suit, closely followed by defending British Champion Tim Daglish with 17 reps, and Lewis Blackwood in 3rd position with 15 reps.

The third event of the 2022 England’s Strongest Man U80KG was the classic Farmer’s Walk. The competitors had to pick up 100-kilogram (220.5-pound) implements and carry them for 15 meters. This was done a total of three times, so the total length comes out to 45 meters. Tommy Chivers won his second event of the day with a time of 16.85 seconds. Josh Lancaster, Richard Molnar, Tim Daglish, and Andrew Keys were close behind.

Many of the men battled with a hard run of 5 bags ranging from 13.5 kilograms to 22.5 kilograms, as they had to throw them over a 4.3-meter high frame. Tim and Joe Daglish came in first and second, respectively, with Tom Hulme coming in third. These three are the only lifters who have ever hit four bags. This even really shook the overall rankings.

Athletes carried a 100-kilogram (220.5-pound) sandbag for max distance with no time limit stopping them. Andrew Keys managed to carry it for a mind-blowing distance of 210 meters (688 feet) to win the final event of the 2022 England’s Strongest Man U80KG . Following him in this event were Josh Lancaster, Matt Whalley, Connor Cowens, and Tim Daglish.

Josh Lancaster also decided to break the U80KG Monster Dumbbell World Record, and was successful in doing so by lifting 100 kilograms (220.5 pounds). Daniel “Flash” Ashcroft held the previous record of 96.2 kilograms (212.1 pounds). By breaking this record, Josh Lancaster became the lightest person in history to press 100kg above his head with one arm.