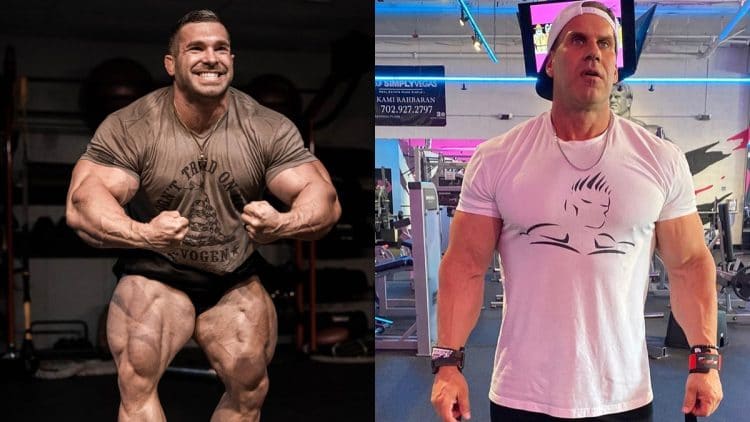 Cutler is among the most prolific bodybuilders to walk the earth. During his reign as a Men’s Open Olympia champion, he secured the most prestigious crown in the sport on four separate occasions (2006, 2007, 2009, and 2010). Known for his epic rivalry with Ronnie Coleman, Cutler brought attention and eyeballs to the growing sport throughout the mid-2000s. He finally dethroned “The King” at 2006 Mr. Olympia.

Weaponizing muscle mass and detailed conditioning, Cutler never slowed down inside and outside the gym. He is an open book when it comes to bodybuilding and understands the finer details necessary for reaching greatness in such a competitive sport. In the wake of the 2022 Pittsburgh Pro, a crop of talent guest posed at the show, including former 212 champion Derek Lunsford. Cutler maintains that with the correct preparation, the reigning 212 Olympia champion will give many top Men’s Open bodybuilders trouble on stage

Jay Cutler ‘Impressed’ With Derek Lunsford: “If He Does the Open, I Wouldn’t Sleep on This Guy”

In a recent discussion with Dennis James and Chris Cormier, Cutler gave his thoughts on Lunsford and believes his potential ceiling in Men’s Open bodybuilding is high. While Lunsford has yet to clarify if he will indeed make the switch into Men’s Open bodybuilding, his coach Hany Rambod believes there is a high chance he does, though was unable to pinpoint an exact time or date.

“This [Derek] Lunsford guy is the real deal. If you asked me who I was most impressed with, for sure Lunsford because I hadn’t seen that before. I never saw him guest pose like that. I saw him in the gym that day. He’s got the width, but he also has separation that, and he’s young enough where I think he’s very dangerous.

If he does the Open, I wouldn’t sleep on this guy either to be honest. I would probably say it’s Brandon’s show coming in, pushing Ramy last year, it was a close call.” Jay Cutler told Chris Cormier and Dennis James.

Cutler believes 2019 Mr. Olympia Brandon Curry is the biggest threat to the Men’s Open title at 2022 Olympia this winter.

I agree with Jay. Brandon [Curry] is absolutely the biggest threat because he has the experience. He turns it around. His body, when he’s in shape, his body just stands out when it comes to the total physique. Even though everybody has flaws, I don’t think there’s anyone on that stage without flaws.

We can go all the way up to Ramy and find flaws. Therefore, I think Brandon is the one that probably stands out the most.”

Agreeing with Cutler, James also relayed that there is far more money to be won in Men’s Open bodybuilding compared to the 212.

According to the four-time Mr. Olympia, depending on how Lunsford looks in August and September will largely factor into his decision to move into Men’s Open. As it stands, his coach, Hany Rambod, has made it clear that one way or another, the two will need to seriously contemplate the transition later this year.

“I don’t know. He had told me honestly that he of course wants to defend 212. But I agree with you, I think it’s going to come down to let’s see how his body is coming together as he gets into August and September, see where he’s at. Remember, Hany [Rambod] keeps his food down. For that guest posing, he was on 150 grams of carbs a day. Think about if he actually ate. He was definitely over 250-pounds, I don’t know exactly how much over.” Cutler added.

Cutler sees Brandon Curry as the biggest threat to Mamdouh ‘Big Ramy’ Elssbiay‘s title at 2022 Mr. Olympia. However, he acknowledges how young Lunsford is, and is confident that other contenders like Hunter Labrada and Nick Walker could easily disrupt the landscape when they all meet on stage in the months to come.

“Unbelievable but once again, people can surprise us but look at the track record of Brandon before I finish off. He’s won second or first for how many? He won Arnold, second, first. He has the best track record. How do you not put him as a contender right? He’s been right there. He either won it or been second for a few years so nothing against the other guys. I think Walker has a great future. I think Hunter does. Those are going to be the top guys here in the future. They’re both pretty young guys, so let’s see how they land.” Cutler shared.

Given the prize money increase and the luxury of eating whatever he wants (within reason), the move into Men’s Open is an attractive option for Lunsford. After guest posing instead of ‘Big Ramy’ at the Pittsburgh Pro, Lunsford wasn’t dwarfed while standing next to some of the freakiest mass-monsters in the Men’s Open division.

Watch the full episode of The Menace Podcast below:

RELATED: Jay Cutler Opens Up on Steroid Use During Competitive Bodybuilding: “I Think I Abused Drugs”

Cutler has developed an eye for talent throughout his illustrious career and is confident Lunsford will make waves in Men’s Open bodybuilding in due time. Should Lunsford make the anticipated switch into Men’s Open, Cutler believes he will be ‘very dangerous’ on stage against other top names in the division.