How To Do Shoulder Tap Push-Ups – Tips, Benefits, Variations, Sets and Reps

Pump up your pecs and strengthen your core muscles with a plyometric push-up variation. 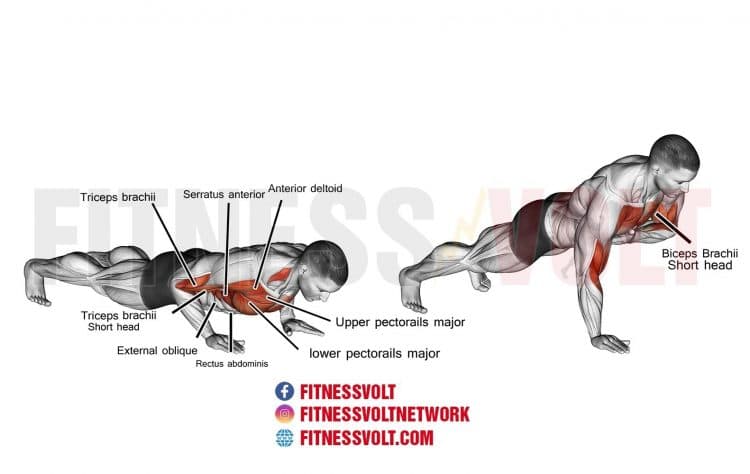 While some push-ups focus on hypertrophy and strength development, variations like the shoulder tap push-up are more geared toward developing the functional aspects of physical performance.  A plyometric based movement, its technique challenges not just the pushing muscles but also the core, hips and legs to keep your body stabilized and strong while one arm supports your weight.

How To Do Shoulder Tap Push-Ups

Push-ups appear to be a simple exercise and they can be once you learn how to do them correctly. But most people do them totally wrong, or at least they aren’t getting as much benefit from them as they could be. A properly performed push-up will maximize chest muscle activation and protect your shoulders but that means your body needs to be perfectly positioned.

Here’s a checklist and detailed step-by-step instructions for the perfect push-up! Then all you’ll do is add a shoulder tap.

Before you begin, consider going through the following perfect push-up form checklist numbered in chronological steps. This will help to ensure you’re maximizing the movement and protecting your shoulders and joints. If you’re more advanced and have a solid understanding of correct exercise form then skip to the shoulder tap step.

We all have different body types and arm lengths which usually determines the ideal hand width and placement. You want to be both comfortable yet in an ergonomic position to ensure proper body mechanics.

To find your hand width:

Step 2: Setting the chest and pelvis

If you want to do a perfect push-up, your chest and pelvis need to be on the same level. Two very common push-up mistakes are letting the hips sag down causing the worm effect, and lifting the butt too high, shifting most of the load on your front deltoids.

You’ll not only waste perfectly good energy making these missteps but you’ll also waste your time!

The next thing that you want to do is pull your shoulders down and back. This will create stability in your torso, support proper movement of the scapula (shoulder blades), and lead the exercise with your chest muscles.

The last step is to tighten your core muscles. Now you’re ready to do a shoulder tap push-up!

To do shoulder tap push-ups:

Watch the video example below to see a demonstration of shoulder tap push-ups.

Why should you include shoulder tap push-ups in your chest workout rotation?

Shoulder taps work the chest, triceps and shoulder muscles all in one. Including a tap is simply a bonus technique that forces you to activate more stabilizer muscles. Having to balance your weight on one arm will also transfer over to your single arm/unilateral (see more details about unilateral training under benefits section) presses, improving your pushing performance in these movements.

While core isn’t in the name, balancing on one arm in a push-up position forces your abs, obliques, and back muscles to work harder. That makes it a powerful core and total body movement. Building a solid and resilient midriff is going to make you stronger, more capable and less injury prone.

Muscle coordination, left to right symmetrical development, improved joint stability, and stronger core muscles are all side effects of training one side of your body at a time. Unilateral training should be programmed into everyone’s workout plan because while being big and strong is a great thing, you also need to be functional and well-balanced.

When training shoulder tap push-ups, pay attention to how you feel and if both sides are equally as strong or if either is lacking.

Now that we went over the pros of shoulder tap push-ups, it’s only fair to mention any potential cons.

Push-ups, in general, aren’t necessarily a beginner exercise. Although it really depends on someone’s starting strength and bodyweight. But it’s nothing a few months of serious training can’t fix. After you’ve developed sufficient upper body strength, you can progress to adding the shoulder tap for added benefit.

There’s a right and wrong way to do most exercises. Don’t make these mistakes when performing shoulder tap push-ups.

Using too much delts – The shoulder tap variation requires more total body stability than standard push-ups. Consequently, when someone lacks enough upper body strength, it causes them to protract the shoulders too much forward, shifting more of the emphasis on the delts and less on the chest which we don’t want.

Not focusing on the push-up – The push-up is half of the movement but oftentimes people rush through it and neglect to maintain proper exercise form because they’re too focused on the shoulder taps. Slow it down and ensure the muscles are working to complete the movement.

Tapping too quickly – Some people perform the shoulder taps so fast that they break proper push-up form and fail to benefit from the functional aspect of the movement. You don’t need to be slow like molasses but go at a moderate pace.

Shoulder tap push-ups can turn an average push-up workout into a functional total body movement. These variations are similar but offer their own unique benefits and advantages.

If you’ve become proficient with the basic shoulder tap push, you can increase the load on your chest by elevating your feet on something like a block, bench, chair, etc. The higher your feet, the harder the push-up. So start with a shorter object.

Tap push-ups target the core muscles and upper body stabilizers while clap push-ups are an explosive plyometric variation. Athletes can especially benefit from this push-up because it has real world application in sports-based activities where explosive upper body power is needed.

Single arm push-ups have all the benefits of taps plus much more. But keep in mind, it’s several levels more difficult too. That’s because you’re balancing on one arm from the beginning to the end unlike the latter. So you’re stabilizers have to shift into overdrive during the single arm push-up variation.

While they share many similarities, the inner pec push-up involves arm adduction (when the arm moves cross body) while shoulder taps don’t. Adduction gives you that intense squeeze in the pecs that you don’t get with most push-up variations.

For complete chest development, you should be incorporating adduction along with your pressing movements to maximize stimulation and possibly overall development of your pecs.

To do inner pec push-ups:

Push-up and reach under

A similar but harder variation is to perform a push-up and then reach under your body. It’s a logical progression from shoulder tap push-ups because you get a little more core activation and stabilization.

How Many Sets and Reps?

The optimal sets and rep range is relative to an individual’s level of training experience and goals. You’ll ultimately have to determine the best workout structure for you but we also like to offer some recommendations to help guide you. With shoulder tap push-ups, your bodyweight is the resistance so you have to program your training accordingly.

Shoulder tap push-ups involve nearly every skeletal muscle in the human body from your head down to your toes. But it’s the muscles from your waist up that do most of the heavy pushing. After all, it’s still a push-up variation.

If you’ve become bored of standard push-ups or are just looking to add another chest exercise to your push day workout rotation, shoulder tap push-ups are a must. It’s a plyometric variation that adds a core stability requirement by removing the use of one arm at the top of press out, forcing your chest, tris, delts and abs to work overtime.

It may look easy if you’re already accustomed to doing push-ups but see if you still feel that way after giving a try!