If you're a demigod then the single arm push-up is probably right up your alley. Try this advanced chest variation for more strength and size. 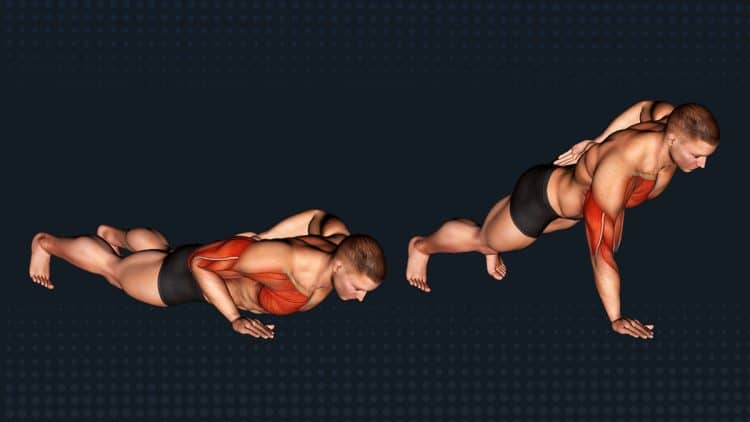 One Arm Push Up Guide

Once upon a time, the single arm push-up was a feat thought to have only been achieved by exceptional humans. However, while still a very challenging variation of the basic two-arm chest push-up, it’s not as hard as it seems so long as you practice. But you do need to have an advanced level of pressing strength to do them with good form.

In this guide, we’ll help you nail your first one arm push-up to drive more growth into your pecs and develop more pressing strength. Plus you’ll also learn about form tips, benefits, variation and alternatives, sets and reps, programming, and anatomy of muscles involved in single arm push-ups.

How To Do The Single Arm Push-Up

Being an advanced push-up, there’s more involved in the single arm version. It requires greater muscle recruitment, attention to detail and focus to do with good form.

Note: We assume no responsibility in the event an injury is sustained while attempting single arm push-ups. The following instructions are provided as a resource to help guide you in performing this chest variation. You should have training experience and a solid understanding of proper technique to ensure safe and effective movement execution.

Base – The primary difference between a one and two arm push-up is the distance between your feet. Having a wider base during single arm presses is key because of the obvious reason that you have to balance on one arm.

Arm placement – As for arm placement, we recommend placing both hands on the floor about shoulder width apart as you would a normal push-up. Then bring one hand about a hand’s width inward toward the center of your body. The main thing is you want to feel comfortable and not put unnecessary stress on your shoulder joints.

Form tip: A common mistake is letting the hips sink down which shifts the emphasis from your pecs to your triceps.

Now you’re ready to drop down and chest press. How you perform this step will determine your push-up efficiency.

Internal rotation – The key technique during this phase of the movement is internal rotation. For example, if you’re doing a single arm push-up with your left arm, you want to slightly rotate your left shoulder to the right. This will help tremendously with balance.

Repeat steps 1-3 for the desired number of repetitions.

Check out the video below for an in-depth explanation and demonstration of the single arm push-up. Note: This is the hardest version of the one arm push-up.

The following version of single arm push-ups positions the body to make the exercise easier. You will work all of the same muscles but it’s not as strict.

If you cannot yet do a single arm push-up but want the closest thing, try the following variation using a training band attached to an anchor point like a power rack or something similar.

If you don’t have access to a band setup, you can replicate this assisted variation by getting into a push-up position and placing one hand up on any of the first few steps of a staircase (depending on your experience level) or something of a similar height.

Single arm push-ups aren’t a gimmick. In fact, it’s one of the top bodyweight chest-building variations. Here’s why we think you should do them.

Just because you can do 20 push-ups doesn’t mean you can do one single arm press. Two arm pushups are much easier because you have the strength and stability of two limbs (bilateral) and you’ll notice how much of a difference pushing your weight up using just one arm makes. Consequently, you’ll build more strength doing unilateral (one side at a time) exercises.

A major advantage of single limb movements is that it’s equivalent to adding more resistance without actually having to.

A common misconception is that using weights is more effective than bodyweight exercises. That couldn’t be further from the truth. If the exercise is challenging enough, it’s similarly effective for building strength and muscle mass. It depends on your experience level and the variation. You can replace heavy bench presses with single arm push-ups when needed, and both have their advantages and disadvantages.

Going from a two arm push-up to its single arm counterpart is like switching from a regular bicycle to a unicycle. It’s going to require more stability, focus and technique to do. But that means your core muscles will have to work harder and that’s a great thing.

Stronger core muscles will help you to lift heavier, perform better and prevent injuries because they play such a vital role in physical activities and daily tasks. Take advantage of every opportunity that you get to make your midsection more resilient.

You can imagine that with such a challenging exercise there are a few drawbacks.

One thing for sure is you need to be more advanced before you attempt single arm push-ups. That’s not just for safety but also you probably won’t be able to do them with good form. Once you can do 20 good push-ups then we can talk about a one arm push-up.

Even if you’re strong enough to do single arm push-ups they’re still awkward. Which means your joints can be placed in a compromised position, especially the shoulders, and if you’re not careful, you can injure yourself. It’s dangerous to jump right into this variation especially if you’re not used to unilateral upper body exercises.

Using progressions is the best way to work up to the single arm push-ups.

To recreate a similar movement to the single arm push-up but using different movements, we’ve included some awesome variations and alternatives from easier to even more challenging.

If you’re a beast then the one arm pushup may lose its potency after some time. What you can do to continue progressing is wear a weighted vest or backpack, or have someone apply resistance to your back by leaning their weight onto you or adding a weight plate.

If you can’t do the one-arm pushup, stick to the standard two-arm version. However, if you find that’s too easy for you, try these 13 next level pushup variations that are much more challenging. In fact, you need to be doing harder pushup variations if you want to get bigger and stronger pecs.

This is personally one of our favorites and if you’re not already doing it we promise it’ll be a regular movement in your chest workouts from now on. The major benefit of the cable single arm press is that you’ll get an amazing stretch combined with a little rotation and arm adduction for peak chest muscle contraction. Incorporating these elements can make a difference in your chest development.

If you cannot do a single arm push-up and want to get stronger using just your body weight, try these variations. The following video tutorial is also a great resource for learning progressions and proper single arm push-up technique.

Single arm push-ups on a wall

Wall push-ups are probably the easiest bodyweight progression because you’re pushing against a much smaller percentage of your bodyweight. This version is more for those who want to practice the technique rather than building strength. Because if you cannot do regular push-ups yet, you’re not anywhere near strong enough to try the single arm push-up.

The next best thing is to do one arm chest press with your body elevated on a bench, counter in your house, or anything similar. As you get stronger, gradually move to a lower platform.

The classic push-up on the knees is also a good option to progress in the one-arm push-up and it’ll be more challenging than the previous variations.

Before you try single arm push-ups, work on your archer push-ups first. It’s essentially a variation of one arm push-ups but you have more support on two arms. Mimicking the technique of a bowman, you’ll shift your torso from left to right so that one arm is underneath your body supporting your weight while the other is extended out.

Watch the short video tutorial below to learn the basics of archer push-ups.

Push-ups and its variation are typically bodyweight-only which means once you can do more than 30 or so they become much less effective unless you’re trying to build muscle endurance or just get a nice pec pump.

Single arm push-ups are going to be plenty challenging for most people and doing 20+ reps is likely out of the question and a bridge you can cross once you get there (e.g., wearing a weighted vest).

Most people don’t need to worry about the number of reps at this point. Just focus on good form and pushing yourself to get as many single arm push-ups as you can.

Here are our sets and reps recommendations for single arm push-ups depending on the goal. Note: try to take each set to failure.

Push-ups are chest-focused exercise. But make no mistake… they work many more muscles in your upper body including the biceps and forearms believe it or not. Learn about every muscle involved in single arm push-ups.

Hopefully this guide was able to help you get your first single arm push-up but if not, keep developing your pressing strength with more challenging two arm push-up variations and a progressive chest training workout routine. This pec building variation is within arms reach (literally) for those who desire to be a part of the elite, and you can proudly add it as part of your advanced chest workout routines!

The push-up (or press-up for our British readers) is the most popular and widely performed exercise on the planet. Almost...