How To Do The Decline Barbell Bench Press – Tips, Benefits, Variations, Programming

Fill out your lower pec muscles with heavy decline presses. 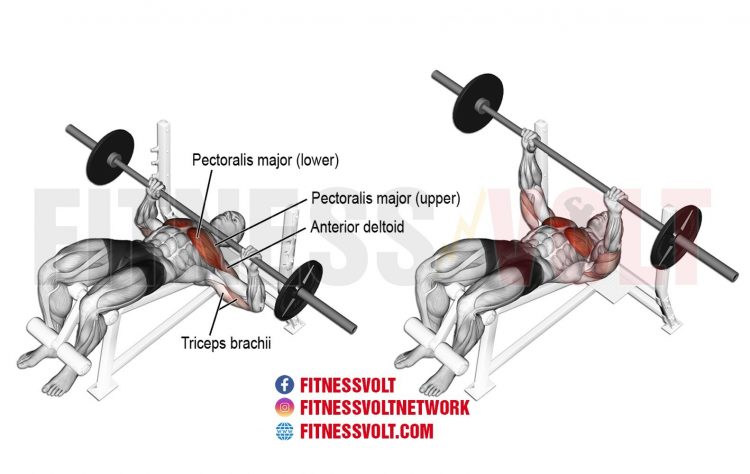 The decline barbell bench press is a compound exercise that emphasizes the lower chest muscle fibers also known as the sternal head. Most exercisers probably don’t include it in their chest workouts but it does have some advantages over a flat or incline bench press which we’ll discuss in this training guide.

Many people might think it’s not a necessary exercise variation but it’s worth trying to see how your chest responds. Learn about the benefits of decline presses and try out our top variations and alternatives.

How To Do The Decline Barbell Bench Press

Watch the provided video included below to see a short demonstration of decline barbell bench presses.

These are some decline barbell bench press mistakes to avoid.

Not enough range of motion

Why shorten your range of motion on the decline bench press when it already naturally places you in a position that decreases the distance between your chest and the bar. Not to mention, it’s typically less harsh on the shoulders. You should definitely lower the bar and touch your chest to make it worth your efforts.

Not using a spotter

It may feel easier to lift more weight on the decline bench but be careful not to overestimate your strength ability. If training heavy still use a spotter to keep yourself from getting crushed by a loaded bar.

There’s a difference between faster reps and bouncing the bar off your chest. Not that it won’t stimulate chest gains but you need to control the bar and its path as you complete each rep.

Why should you include decline barbell presses in your chest training regime?

While you cannot completely isolate sections of a single muscle group, you can shift where you place the emphasis by changing the angle of an exercise. In this case, declining your upper body will allow you to press along the direction of your lower sternal head fibers.

As an added bonus, a combination of factors tends to allow lifters to use more weight on the decline bench press (1). Try it out and you’ll see for yourself!

Easier on the shoulders

Decline presses are a more shoulder-friendly variation compared to a flat and especially an incline press. For that reason, many exercisers will utilize this exercise instead for their heavy pressing movement. It probably has to due with the delts being lower than the chest during the decline press and the reduced range of motion.

For some lifters, the eccentric or stretch phase of bench press bothers their shoulders and hence a common fix is to stop a few inches before the bar hits the chest.

Strength athletes use a technique where they arch their back to minimize the distance between the bar and their chest. This places them at a declined angle similar to the decline barbell bench press  which allows them to lift heavier weight and have a better chance at completing a rep.

Powerlifters can find this exercise to be a useful training tool for their max competition lifts.

Training boredom is a real thing and it affects all of us every now and then. Decline presses may not be the most popular variation but they are a way to challenge yourself and possible stimulate new growth in your pecs!

While it’s not everyone’s favorite Monday chest builder aka the flat barbell bench press, it’s still a bench press. If you’ve ever trained at a crowded gym chances are all the flat bench stations are occupied and not likely to be free anytime soon.

Decline bench stations are typically the least popular of the freeweight bench variations and it’s a great way to load your pecs on chest day. There may be a misconception that declines only work the lower chest but they still work the full chest including the upper and middle as we discussed you cannot isolate one part with any movement.

Now let’s talk about some of the drawbacks of decline barbell bench presses.

If you’re new to decline presses it will take a little getting used too. Not just because you’ll be more in an upside position with your head lower than your chest but you’ll notice that it takes more stabilization to keep the bar in the right spot as it will want to wobble more than you’re used too. However, once you get it down it shouldn’t be an issue.

Because you’re in a somewhat upside down position, you’ll immediately feel more blood rushing to your head. Some people may find this to be very uncomfortable and not worth it. In that case, we recommend trying an upright machine variation such as the Hammer Strength decline press also included in our best variations section.

With the decline bench press, your feet are several feet off the ground and you, therefore cannot take advantage of leg drive to assist your pushing efforts.

Below we’ve picked out our favorite decline chest exercise variations that have advantages over the freeweight barbell decline press.

The dumbbell decline press offers you more freedom of movement and increased stabilizer muscles recruitment. However, the one drawback is that you have to lift the weights higher to get them in the starting position. If you want to use heavy dumbbells, we recommend having someone hand them to you, and take them away when you’re done with a set.

Utilizing machine exercises such as the Hammer Strength decline press or similar variations that are performed in an upright position make this movement more user-friendly. Declining your upper body will cause blood to rush to your head and for some people it’s not ideal.

Plus many do prefer this variation as they feel more of a contraction in the lower pecs which results in a better overall workout.

If you don’t have access to a decline bench, you can do decline presses from a glute bridge position on the floor. You can use a pair of dumbbells or perform it with a barbell from a power rack.

A great alternative option to the decline barbell bench press is a high to low cable fly. You won’t be able to load the pecs with as much weight but you do get the enhanced stretch across the length of the muscle fibers and more activation of the chest fibers through arm adduction.

Fly variations in general should be included in every serious chest workout routine for maximum pec development.

You can easily replicate a decline bench press with a bodyweight push-up by elevating your upper body up on a platform several inches from the floor or on a Smith machine adjusted to the appropriate height.

Dips especially on a power tower will also hammer your lower chest muscles plus it’s one of the best triceps focused exercises. You can also wear a weighted dipping belt or hold a dumbbell between your feet to add more resistance and hence make more gains!

The beauty of training for hypertrophy (muscle growth) is you can change up the order of your exercise to stimulate new growth using different exercise variations.

Decline barbell presses are a straightforward exercise that you can include at the beginning, middle, or end of your chest workout routine, ideally before the isolation movements. If you feel your lower pecs are underdeveloped, we recommend prioritizing them first sometimes in your workouts.

Try out these lower chest workouts and exercisers for a sculpted chest.

There’s no such thing as a perfect sets and reps range for everyone. Your level of training experience and workout goals will ultimately determine how much training volume you do or how you structure your training sessions. However, we always recommend using a variety of rep ranges.

There’ve long been comparisons between the three bench press angles – flat, incline and decline. We can tell you that all three will work the entire chest as there’s no way to single out a specific section of a single muscle group ( e.g., upper, mid and lower) (1). However, research has shown that angle/bench position can influence chest activation to a degree (no pun intended).

For example, one 2015 study compared chest activation between 0, 30, 45, and -15 degree bench angles. (2). Researchers found that a 30 degree incline elicited greater upper pec activation while the flat and decline bench press were superior for total activation of the lower chest.

Takeaway: If you want to maximize lower chest gains the decline and flat bench are the way to go.

If your lower pecs are lagging or you want more chest growth then it may be worth including a few sets of decline barbell bench presses or its variations in your workouts.

They offer a very shoulder friendly way to build pec mass and strength and whether you’re a bodybuilder or are just looking to maximize your muscular potential, you’ll get the best results by hitting the muscles from different angles using a variety of exercises like decline presses.

WATCH: Phil Heath Gets Real About Bodybuilding vs Family