The superstar martial artist Jet Li has spent the last few years away from the spotlight, but a shocking new photo of the action star shows Jet Li looking older than his 55 years has gone viral, sparking concern from fans who fear his health is on the decline. 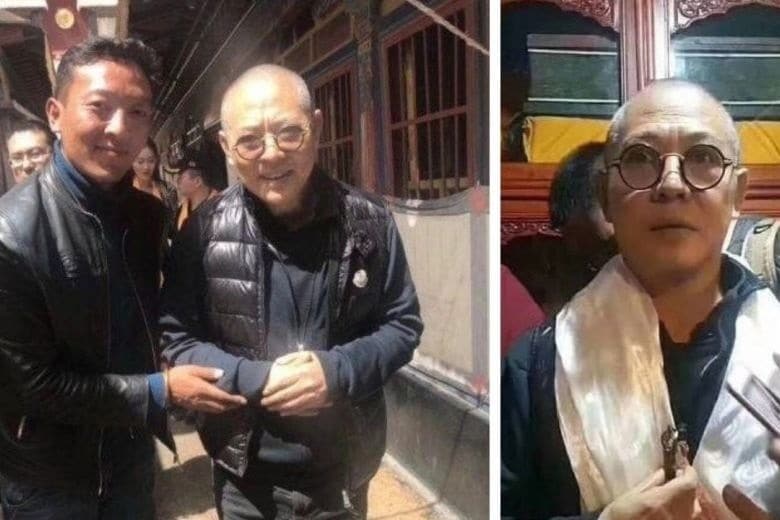 The man in the above photo looked both familiar and foreign… right?

Li was photographed recently with a fan in Tibet, looking shockingly thin while clad in a black vest and glasses.

So, apparently, Jet Li is suffering from "hyperthyroidism and spinal problems" and this is him now ❤️😓: pic.twitter.com/Ss0W2EL96D

“So, apparently, Jet Li is suffering from ‘hyperthyroidism and spinal problems’ and this is him now,” the tweet read, inspiring dozens of responses from fans who said the photo left them “broken” and “sad.”

The 55-year-old movie star revealed in 2013 that he was battling hyperthyroidism – a condition in which the thyroid gland produces too much of the hormone thyroxine.

But according to actor’s manager Steven Chasman, Jet Li is “completely fine,” Steven tells USA TODAY that Jet Li, is in good health, calling the online discussion “much ado about nothing.” Chasman says:

“We appreciate everyone’s concern. But Jet is completely fine. There’s nothing wrong with him. There’s no life-threatening illness. He’s in great shape.”

Chasman also shared a photo of Jet Li, saying the picture in Tibet has been taken wildly out of context.

“It’s one picture and people are making these interpretations from it,” he says. “If you took a picture me at the wrong angle and wrong time of the day, I could look frail as well.”

In late December, Li shared a video wishing his fans happy holidays and good luck in the new year ahead.

Jet Li last appeared on screen in 2016’s “League of Gods,” where he played Jiang Ziya, a wise sage with flowing white hair.

As the photo made the rounds on Twitter, an outpouring of concern and support for Li rolled in.

Jackie Chan and Jet Li were like Gods to me when I was little. It's so sad to see Li like this 😓 pic.twitter.com/lO2FdTTvDe

I love Jet Li, he's my hero and he inspires me so much. I hope and pray you get well Li. We need you.

Prayers go to him.

Let’s hope he gets better soon.

The Most Attractive Eye-Catching Male Body Parts Ranked By Women

Take out your calendars, and mark the following date, April 7th. That's the day we find out who's the best...