Take out your calendars, and mark the following date, April 7th. That’s the day we find out who’s the best Lightweight in the world, at least according to Dana White. The most famous bald-headed figure in today’s sports appeared today on the “Toucher and Rich” podcast and touched up on a bunch of UFC related stuff. Among the things that he talked about, the inevitable was asked; what the hell is he going to do about the awkward love triangle between Khabib Nurmagomedov, Tony Ferguson and Conor McGregor that’s clogging up the UFC’s Lightweight division?

Have no fear, Dana White is here! The answer was simple, the unstoppable bear wrestling Daeagestani will fight the interim champion, Tony Ferguson. That’s simple enough…but what does it mean? Well, it means the following; 1. Conor McGregor isn’t fighting anytime soon, 2. Conor McGregor is (probably) getting stripped of his title and last but not least,  3. Nurmagomedov/Ferguson winner will (probably) be crowned the undisputed Lightweight champion.

Even before appearing the podcast, the blad father was dropping clues to what is he going to do with the chaos in the Lightweight division, here’ what he said about this issue after last weekend’s UFC Fight Night 124 fight card:

“If he comes back in September, that’s almost two years (since his last MMA fight) (…) Love Conor, respect Conor, love everything that he’s done for this company. Everybody knows that. I say it all the time. (But) the belt would have to move on. You do Khabib vs. Tony; we’re working on that fight now. If and when Conor comes back, he would get the first crack at the title.”

It’s pretty damn clear that even at that point Dana White was aware that Conor McGregor will be taking his time for his long-awaited octagon return. Now before you get all uppity and start jumping up and down like a little schoolgirl, remember the following. This fight was booked three times before and each time it fell through.

The first time they were scheduled to fight was in 2015. when Khabib had to pull out due to injury. Ever the persistent booker, Dana White rescheduled the fight for April of the next year. However, 11 days before their fight Ferguson had to withdraw from the fight because of lung issues.

This all brings us to the latest time they had to fight, March of last year. The two unstoppable Lightweights were scheduled to fight for an interim Lightweight championship belt. However, as luck would have it, Khabib Nurmagomedov had to pull out due to weight cutting issues and the fight was once again scrapped.

Since the last time they were scheduled to fight each other, Tony Ferguson won the interim belt against Kevin Lee at UFC 216 and extended his winning streak to 10 in a row. While Khabib Nurmagomedov, on the other hand, whipped the floor for three round with top Lightweight contender Edson Barboza in a one-sided beatdown and extended his fight record to a perfect and mind-numbing 25-0 at UFC 219. 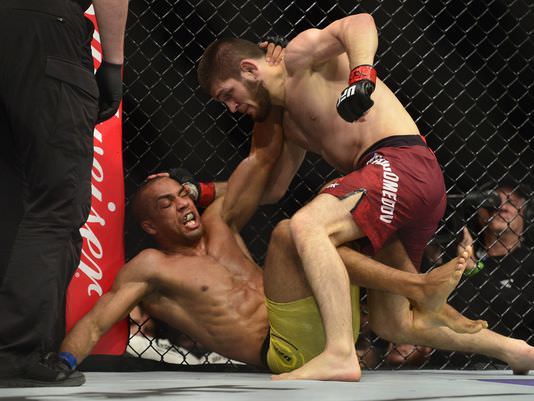 It’s safe to say that despite Dana White announcing this fight, there’s a very good chance one of these two gets injured, has a bad weight cut, gets into a freak accident or gets abducted by aliens.

Also, keep in mind that “official” announcements like this are about as “official” as that time you said you would start your diet “next week”. Khabib Nurmagomedov signed a contract to fight Eddie Alvarez for the Lightweight title before it was announced that Conor McGregor would be fighting the then champion, Eddie Alvarez.

So yeah…keep an eye out for this match as things will for sure get wild and unpredictable very soon.

Female Bodybuilder, 32 Kinga Kesik Passes Away After Battle With Cancer