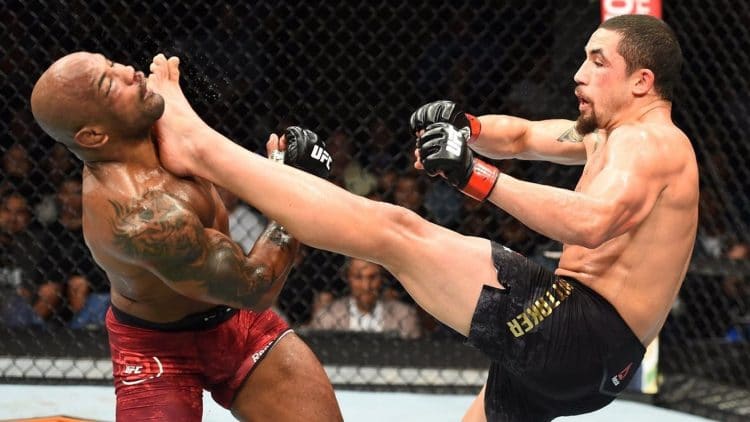 In the main headliner of UFC 225 PPV event, Robert Whittaker clashed with Yoel Romero in a non-title bout Saturday (June 9, 2018) from inside United Center in Chicago, Illinois.

Romero had the chance to win the middleweight title, but he failed to make championship weight at Friday’s weigh-ins. Soldier of God” came in at 186 pounds in his first attempt and commision granted him additional two hours to make the 185-pound mark, but came up short by .2 pounds on his second attempt. Later UFC president Dana White announced the fight would go on as a non-title fight.

In there first outing Robert Whittaker defeated Yoel Romero via unanimous decision at UFC 213 back in 2017.

In the first two rounds, Romero seems dull by all botched weight cut. Whittaker’s powerful punch caused Romero’s right eye to swell nearly shut, leading many to assume the finish is near.

By the third round, both fighters hurled massive strikes on each other. Both landing uppercuts, kicks, and elbows that would have knocked out many other competitors. No one got down and ended up in the fourth round.

It was obvious, Whittaker’s right hand wasn’t doing good, as he quit throwing strikes with that hand. Whittaker continued to move forward land a kick which landed low and gave Romero a well-timed time-out.

In the final round, Romero dropped Whittaker early and almost pounded him out. It seems like both fighters were exhausted and Whittaker made it back on the feet survive the round.

This victory was ninth in a row for Robert Whittaker improved his record to 20-4 and Romero now 13-2 with two losses in his past three fights.

Check out the action highlights below:

One of the fights of the year 🙌