Fans have the right to choose Mr. Olympia winner!

Bodybuilding world is shocked and confused by the latest news. Apparently, fans have the right to choose Mr. Olympia winner from now on! Fans will be another judge! People who sit home watching the live stream on their computers will have the ability to vote in some capacity!!! How will they vote? we don’t know yet. But one thing is certain, the vote of the fans will count.

In the July edition of Muscle & Fitness magazine, an article by Robin Chang in the Olympia Insider section of the magazine mentioned about the latest method of picking the winner for 2018 Mr. Olympia.

For the first in the history of Mr. Olympia and professional bodybuilding fans will judge each competitor and rank them—and those scores will count in the official decision.  YES, You and all other fans at the Orleans Arena will have a voice in deciding who will be the next Mr. Olympia 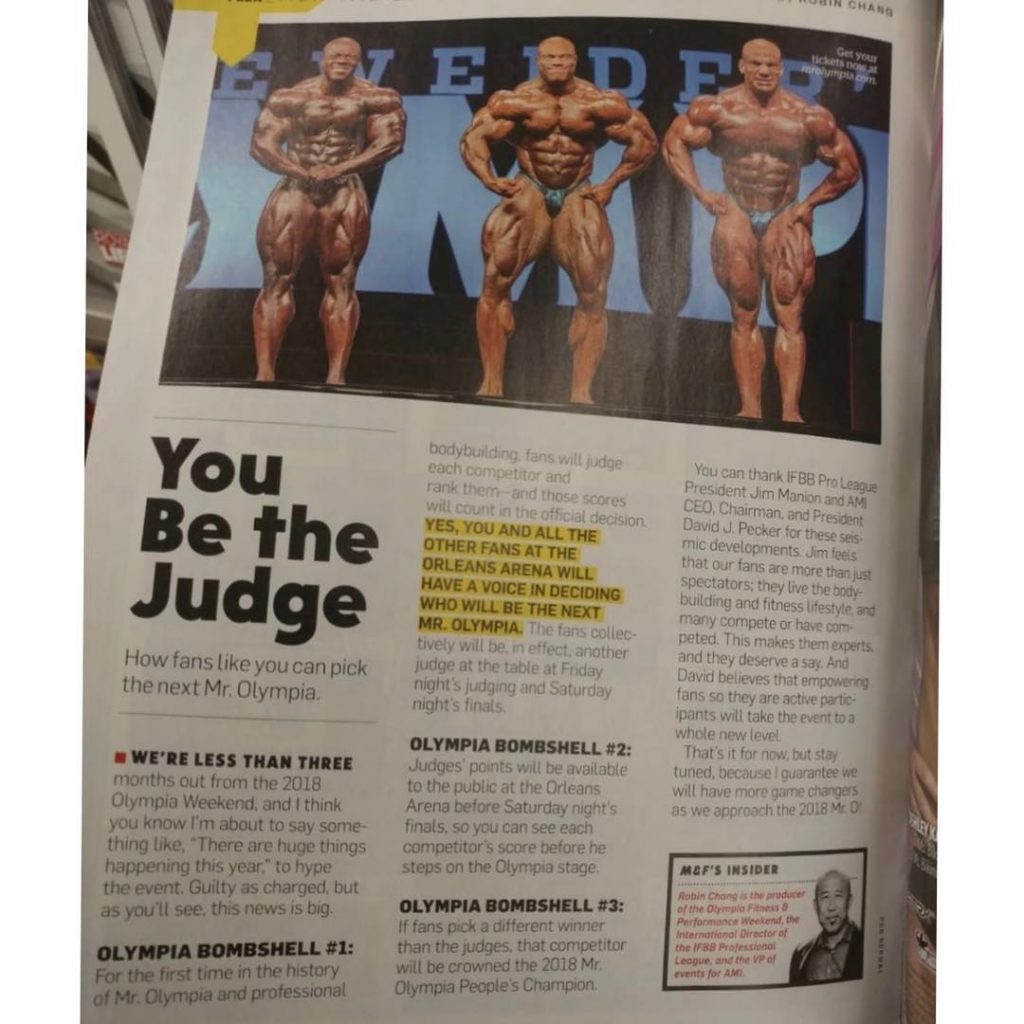 As you probably know, for every judge and every competitor the two high scores and the two low scores get thrown out. It prevents anomalous things from happening or judges that intentionally set irregular scores. So, the vote of the fans probably won’t count or affect the score of Mr. Olympia. But fans will be able to choose the People’s Champ via their votes, and this bodybuilder will get People’s Champion Award.

Here are the most critical points of picking a winner:

Just remember the old challenge round back in the day, where you were able to challenge bodybuilders to certain poses. We assume the idea is to try something similar and see how it works out. It is also a world-class move for marketing – more people will be interested in Mr. Olympia competition. But here is what probably happens:

Mr. Olympia judges usually have the final word when it comes to Mr. Olympia winner!

We all know which bodybuilders were People’s Champ during the last few years: Kai Greene, Big Ramy, Victor Martinez, Flex Wheeler and Kevin Levrone were all People’s Champion.

Now, for example, Kai Greene is more popular than, Phil Heath. It could turn into a total disrespect for the winner, and the competition could face the biggest controversy in history. The 2018 Mr. Olympia champion would feel broken-hearted if People’s Choice/Champ is another bodybuilder, and it can leave the champion so sad and depressive.

Just think, could you feel like a real champ if the fans have chosen another bodybuilder? 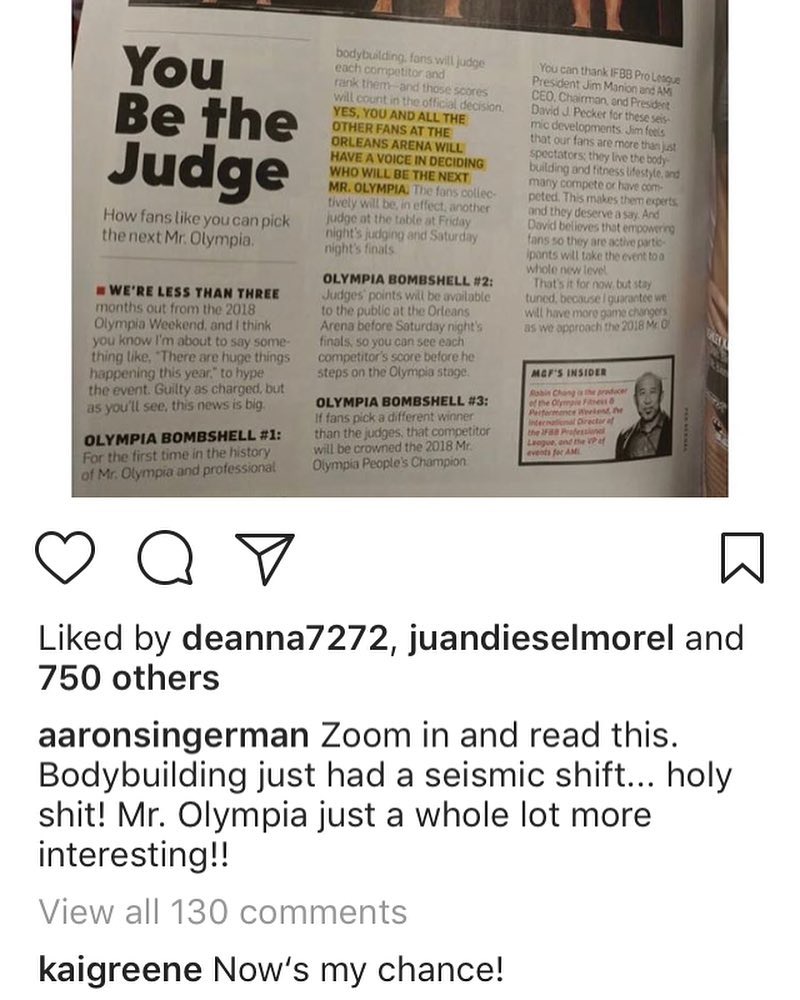 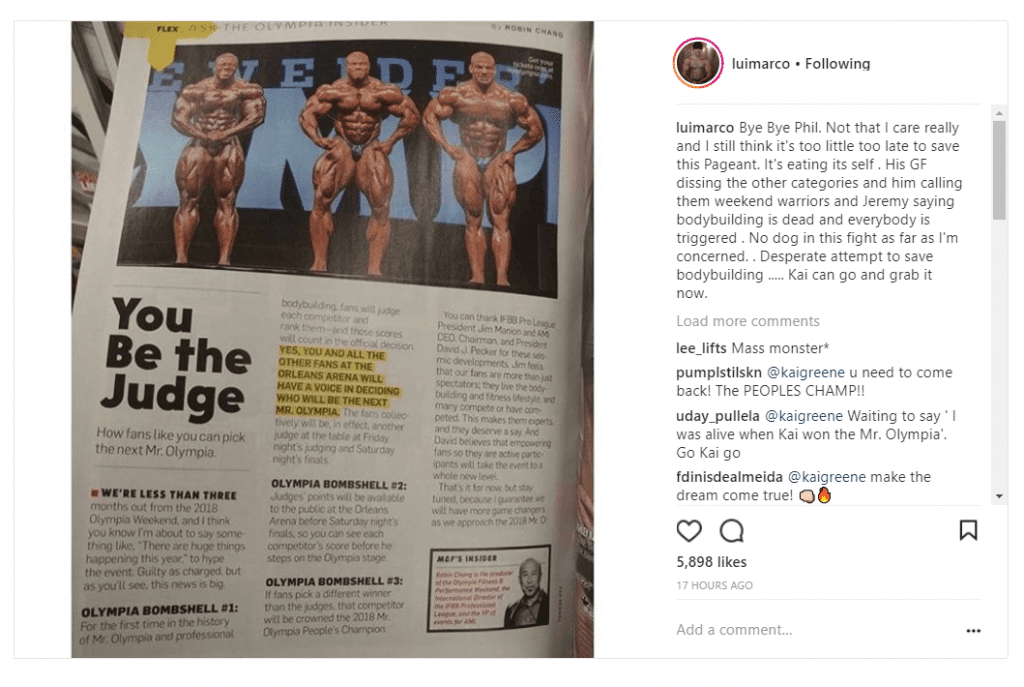