Want to see the most aesthetics physiques in history on a single page? Look no further. 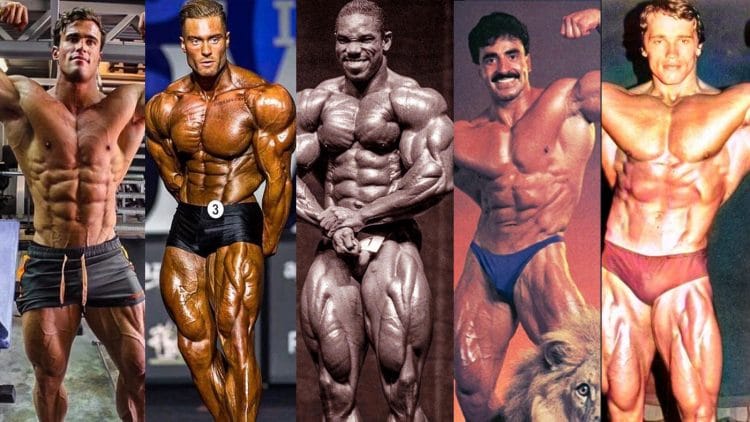 According to Cambridge Dictionary, aesthetic /esˈθet̬.ɪk/ is the enjoyment or study of beauty.

If you want to visit a place filled to the brim with people obsessed with their physical appearance, look no further than your local gym. Do not get us wrong. We are not implying that lifting weights is reserved for narcists.

The fact is that most people get a gym membership because they want to work on how they look. A study proved that physical appearance might have a direct (and indirect) impact on an individual’s self-esteem and confidence.

You do not have to be a rocket scientist to figure out that not everybody who goes to a gym ends up building an awe-inspiring physique – meaning – lifting weights does not guarantee a Greek God-like physique. Building an aesthetic body takes much more than curling dumbbells for a few sets.

Do not believe us?

Take powerlifters and weightlifters, for example. Their training focuses on heavy lifting in the big three movements (squat, deadlift, and bench press) but their muscle symmetry, proportions, and conditioning are no match for a bodybuilder (who knows what they’re doing). Developing a chiseled physique requires knowledge of the musculature, years of experience, and an understanding of one’s own body.

This article is not about IFBB pro bodybuilders who have won the Mr. Olympia contest. In fact, you might only see a few Mr. O winners on the list.

The not-so-beautiful bodybuilder gut is to blame here.

What We Look For In An Aesthetic Bodybuilder

It is no secret that bodybuilding competitions turned into muscle mass contests somewhere in the 1990s.

We cannot blame the bodybuilders alone for this, though. The pro bodybuilding judges should share the load. With a change in trend in the 90s, bodybuilders started getting rewarded for their freakish physiques.

Since pro bodybuilders now had a way to score higher, they were incentivized to push aesthetics to the side and focus on getting as big as possible.

Things started to change when Arnold Schwarzenegger spoke about the bodybuilder’s gut on stage. A few years later a new bodybuilding division – Classic Physique was introduced. We consider this a step in the right direction – albeit late and small.

Athletes on the most aesthetic bodybuilders list are rated based on their muscular symmetry – V-taper and a small waist, conditioning, and posing.

Most aesthetic bodybuilders of all time:

We know what you are thinking – if Arnold is number 15, who is number 1?

First – It is not Phil Heath. For that matter, Heath is not even featured on our most aesthetic bodybuilders of all-time list.

Second – Do not scroll down to find out who is at the top – or in this case – at the bottom of the list.

As you scroll through the list, take a few minutes to analyze each bodybuilder’s physique. Use this opportunity to learn the craft from the masters of the sport.

Arnold Schwarzenegger has become a household name now and could be credited with bringing the fitness culture to the masses.

Must Read: Arnold Schwarzenegger Shares Tips To Get Started With Weightlifting

Samir Bannout aka The Lion of Lebanon was born in Beirut, Lebanon is one of the greatest and most aesthetic bodybuilders of all time. He won the Mr. Olympia title in 1983.

Samir was known for his incredible physique and strength in the gym. In his prime, he could perform bent-over rows with 405lb weights.

Lee Haney holds the record (tied with Ronnie Coleman) for the most number of Mr. Olympia title wins. He won for eight consecutive years from 1984-1991.

Lee Haney can be considered the last of his kind. Dorian Yates won his first Mr. Olympia crown in 1992, and bodybuilding was never the same. It is not that I do not like or appreciate the current state of the sport, but I would any day give up today’s mass hunt for old-school aesthetic wars.

Lee Labrada is known as the giant killer, and I am guessing by now you know how I feel about mass monsters.

The Black Prince was a star from the day he stepped on the Mr. Olympia stage. He placed third in his first content – a feat only a few have managed to pull off.

Robby Robinson is not your typical “on-season” or “off-season” type of athlete. He remained in top conditioning throughout his career and could beat some of the bodybuilders if he is to jump on stage today.

Hands down, Frank Zane had one of the best muscle proportions during his competitive days in the history of bodybuilding. His full-time job as a math teacher could have something to do with his accurate muscular proportions.

After 2 years of serious training, Zane won the 1968 Mr. America competition in New York City and then went on to beat Arnold Schwarzenegger in the Mr. Universe competition. Frank Zane is one of the most aesthetic bodybuilders of all time.

Until you might have felt like we prefer old-school physiques over modern bodybuilders. That is not the case. While we are fans of the golden era of bodybuilding, some modern-day bodybuilders are hitting the nail on the head when it comes to aesthetics.

Thankfully, the trend is changing now, and athletes like Chris are taking the lead.

Chris Bumstead is a Mr. Olympia Classic Physique champ and one of the most aesthetic bodybuilders of our time. We have no qualms stating that Bumstead has taken the best characteristics of golden-era physiques and doubled down on them.

The highlight of Jackson’s bodybuilding career was when he beat Jay Cutler to win the 2008 Mr. Olympia title. His sharp conditioning, muscle symmetry, and round and full muscle bellies have earned him the nickname “The Blade“.

If you are a fitness enthusiast, have access to the internet but have never heard of Ulisses Jr, you have got to be living under a rock. Ulisses Jr. is one of the most aesthetic bodybuilders and arguably has the best washboard abs of all time.

Ulisses Jr. earned his pro card in 2003 and went on to win eight bodybuilding shows. Appearing in Men’s Health, Muscle & Fitness, and FLEX Magazine, he has become an icon in the industry.

“My overall motivation is to be part of history and be compared with legends” – Ulisses Jr.

You could consider Steve Reeves the father of modern bodybuilding. Thanks to his aesthetics, he won almost all bodybuilding shows around at the time – Mr. America, Mr. World, and Mr. Universe. He is also one of the first bodybuilders to have made a career in Hollywood.

“When I worked out, I would concentrate deeply on the exercise I was doing and the muscle I was working. I would picture those strands of muscle working and getting bigger. I’d put myself into almost a hypnotic trance when I was working out.” – Steve Reeves

A few adjectives describing James Flex Lewis – ripped, peeled, diced, shredded, grainy, high-def bodybuilder. He is probably the biggest bodybuilder on this list. Lewis is a 7X Mr. Olympia 212 champ, and his fans are waiting for his open weight debut.

Most people think his nickname comes from the fact that he has great posing skills, but in reality, he earned the name due to his flexibility and the ability to avoid tackles in his Rugby days.

Chris Cormier was on the heavier side compared to most bodybuilders of his time. He weighed around 250lbs, but that did not stop him from bringing clean lines, deep cuts, and shredded legs every time he stepped on stage.

Cormier got his pro card in 1993 and went on to compete in 70 professional competitions, taking the overall title in eleven and placing in the top five 52 times.

Shawn Ray is one of the biggest turnaround stories in professional bodybuilding history. He placed 13th in his first Mr. Olympia contest in 1988. The ranking was nothing to write home about.

Ray took the next year off, worked on his weakness, polished his strengths, returned to the Mr. O showdown in 1990, and took the 3rd place finish. Talk about taking feedback constructively.

Serge Nubret ranks high amongst the most aesthetic bodybuilders of all time. During his peak, no one wanted to go toe-to-toe with Nubret. Most people remember him from his feature in the iconic documentary Pumping Iron. Even Arnold Schwarzenegger appeared blown-away watching Serge Nubret pose.

“Bodybuilding is not just about physical training with weight to change how you look. It’s about mind, body, and spirit together in union so that everything grows, not just your muscles.” – Serge Nubret

Sergio Oliva was the only bodybuilder to have ever beat Arnold Schwarzenegger at the Olympia. Oliva’s trademark pose put all his muscles on display at their full glory. No pro bodybuilder has tried to copy this pose which tells you something about its complexity.

As per rumors, Sergio did not follow a diet and ate whatever he wanted. While preparing for bodybuilding contests he would eat burgers, hot dogs, and gulp down fizzy drinks.

During a work shift, one of Sergio’s superiors came into the lunchroom to discover what secret diet he must be on to have a physique like his, only to find Oliva eating two packs of Twinkies and a bottle of Mountain Dew.

Related: The Life, Times and Training of a Bodybuilding’s Myth: Sergio Oliva

Mike’s training videos leave no doubt that he is the strongest individual on the most aesthetic bodybuilder list. He also probably has the most number of magazine cover shoots on the list.

Although a bodybuilder, O’Hearn trains like a powerlifter. He has been around for decades and is still going strong, just like his workouts. Mike is a 4-time Mr. Universe and 4-time California Powerlifting Champion, Strongman, and California Judo Champion. He has been featured on over 500 magazine covers and starred in the American Gladiator.

We started with Arnold and are ending with Calum. If we had to choose a bodybuilder who best embodies the golden era aesthetics, it would be Calum Von Moger.

Moger surprised everyone with the speed of his recovery after two back-to-back career-threatening injuries. With his gigs in movies and modeling for major fashion brands like Gucci, Calum is helping take the sport of bodybuilding mainstream.

1. Flex Wheeler – The Sultan of Symmetry

Despite his size, Wheeler maintained perfect muscular symmetry and conditioning. Maybe his focus on muscle proportions instead of size cost him the Mr. Olympia crown. We will never know for sure.

Next Read: Flex Wheeler Calls Out Fitness Industry For Being Too ‘Bodybuilder Focused’

While mass monster freak shows do a great job of pulling in crowds, aesthetic bodybuilders sell the sport. We look forward to seeing the Classic Physique division flourish and get a life of its own.

We hope this article will help you work on your aesthetics. Use these bodybuilders as your physique transformation benchmarks. For example, strive to build arms like Arnie, midriff like Frank Zane, shoulders like Chris Cormier, and so on. We look forward to your transformation pictures.