Breaking: Flex Lewis “This Will Be My Last 212 Olympia.”

Just 10 weeks from Mr. Olympia 2018, the 6x 212 Olympia champion Flex Lewis has confirmed that 2018 Olympia will be his last 212 Olympia in an interview with FlexOnline.com

James ‘Flex’ Lewis discusses everything from his 2018 Olympia prep to loss of Dallas McCarver and the possibility of competing in the open bodybuilding division. First, he addressed his Olympia prep:

“At this point in my prep, I’m reanalyzing everything. I obviously have to make the 212-pound weight limit, so at about 15 weeks out, I do everything with that goal in mind.

I do have somewhat of a blueprint to stick to, in terms of numbers. I’ve kept every single prep photo, I’ve got journals to actually see what I was eating at this point in previous preps, what I weighed, etc.

Right now I’m at one of my heavier weights for 11 weeks out–234 pounds. It’s not a bad heavy, it just goes to show that my body struggles with this weight class. But there’s no concern. Neil [Hill] and I have done this six times before, and this is more of a hands-on prep than it’s ever been, now that he moved from the UK to Florida. With him being here, it allows me to be less stressed for the rest of the prep.

It’s been very different this time, and a lot of fun.”

In the response to the question about going for number eight in 2019 should he wins the 7th 212 title this year.

“I have processed this whole situation, and this will be my last 212 Olympia.”

Flex said, if I win the 7th 212 title, I would be a happy man knowing that I tied Arnold Schwarzenegger’s 7 Olympia wins record in his 212 class.

“Arnold was a massive inspiration for me. He came from the other side of the world just like me, and I can relate to a lot of the things he’s done as a bodybuilder. He is the GOAT in my eyes for what he’s done for the sport. I would end my career quite happily, knowing that I’ve been able to tie his record [7 Olympia titles] in my division.”

The reigning 212 champion Flex Lewis revealed he was seriously thinking to end his career in 2017 three weeks before the show, after the unfortunate death of his training partner Dallas McCarver, but he managed to continue and decided to do it for Dallas. Flex often called Dallas McCarver his little brother. 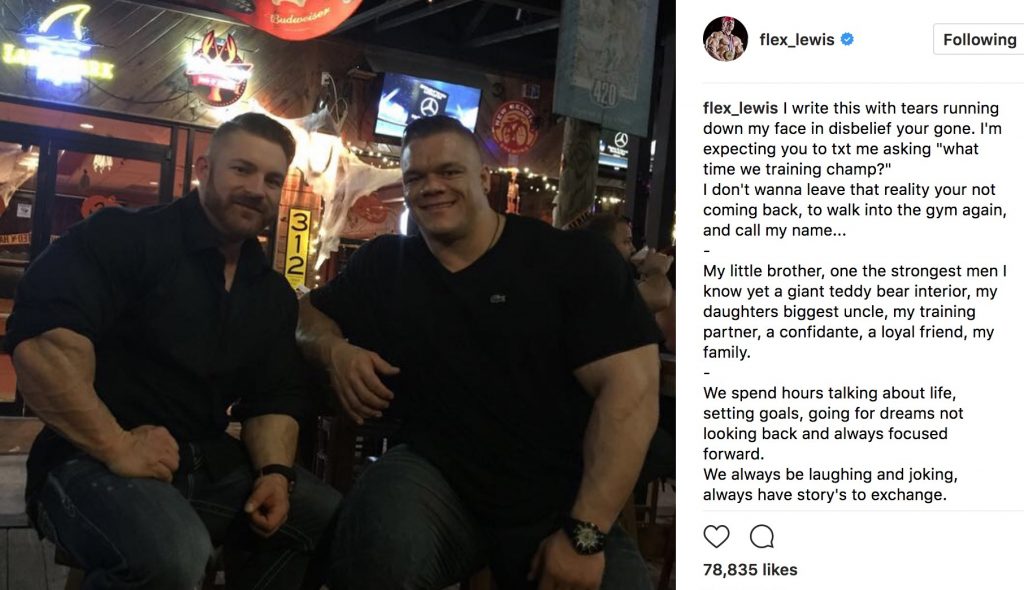 “To be honest, I had entertained the idea of stopping after the 2017 Olympia. Three weeks before the show, Dallas McCarver passed.”

“Then hurricane Irma came, and we thought we were going to lose our house so we had to up and leave. I was doing cardio, training and eating…but it was false energy that kept me going.

I was doing it for Dallas. After I won, I thought, “We’ve done it for Dallas, but it’s not the right time to stop.”

Then my team rallied together, my wife, my coach, my training partner. They knew that I was going through a definite depression. As soon as I finally realized it, everything started changing. I started only putting things that were good around me. The people who had always been there for me were brought to the forefront.

On being asked, in competing as an Open Bodybuilding competitor, Flex says he sacrifices a lot of “size” and “muscle” to make the weight of the 212 class.

“In the 212, I’ve been maxed out since my first show. I know every single year I have to make improvements for the judges, but I also have to make that 212 weight limit. At 220 pounds, I am a completely different animal. I am ready to step on stage but I have to sacrifice muscle to make weight.”

The 212 champ did not completely reject the idea of competing as an Open competitor, he explained:

“It’s a game changer. If–and it is a really big “if” here–if I was to ever step on stage in the open class, I know that that it would be a completely different process to put on the necessary weight to go up against the world’s biggest bodybuilders, without ruining my frame. It would be some time in the making. That’s something that myself, my wife, and my coach will all have to sit down and decide together. If that were to be the case, you wouldn’t see me onstage until possibly 2020.”

“This has been one the hardest decisions, I have EVER had to make and THEN come to terms with, in my entire life.

I been called Flex since 6yrs old been a fan of this sport since I was 12, joined my first gym at 15, stepped on stage at 19 (for the very first time) traveled the world winning titles all over, won my pro card at 23 with an undefeated amateur record.

Fast forward and Now at 34 it’s finally time to say this 212lb chapter is over. I will be finishing with my last 212lb show at this years 2018 @mrolympiallc
–
I won’t lie and say this was easy, I have battled the fact that this will be my last show many times, I went through some very tough times, and being transparent depression, I kept this all to myself, never let a sole in, I suffered massive highs and very low lows, still trying to comprehend last years loss of Dallas and then make this decision the beginning of this year- after months of battling this whilst, still acting walking talking all around the world as a Champion, I can now say I am VERY at peace with my decision.
–
Without my family, my team, coach and certain people, I wouldn’t be were I am today!
–
At one point I was very lost on direction, but I know in my heart this is the best for me, my family and the evolution of what and where I go next.
–
I love this sport and I love being the humble, driven, blue color, peoples Champion, I know I will give that fan at the end the same energy as the one at the front, why as I love it!
I fucking love all you guys, that’s not cliche it’s the truth, I’ve been given the opportunity by the IFBB pro league to take this sport all over the world and I have, from mainstream tv to things in countries unseen. We grown this 212lb class to where it is. You have no idea what you have given me, it’s everlasting is why this year is for YOU the fans.
I can’t wait to see you ALL in September where I will be there to defend my title won last time! “

Flex Lewis said he would be taking some time off after the 2018 Olympia and if he decided to compete again, it would be in 2020. Let’s hope that 2018 will not be the last time we see the Flex Lewis on the stage! But the 2018 Olympia is definitely one that you won’t want to miss.

Do you think Flex can win his 7th title this year? Let us know in the comments below!

How Did Big Ramy Build His Monstrous Wide Back

Canadian bodybuilder Fouad Abiad moved on from professional competition a few years ago but remains a trusted voice in the...