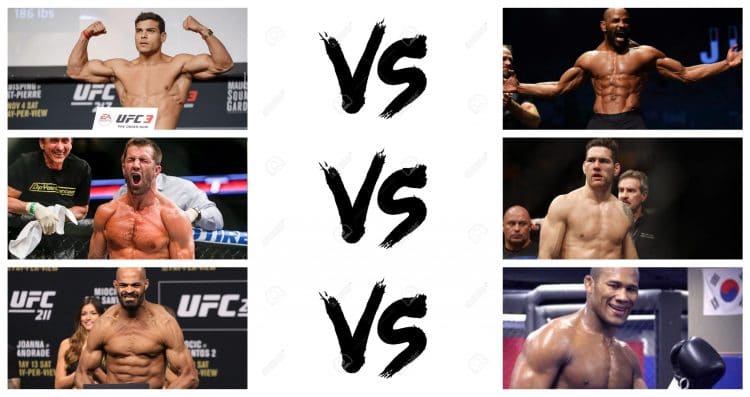 The New York crowd is going to lose its head when they realize what’s brewing under the hod of the upcoming UFC 230 fight card.

First off, we have a rematch 3 years in the making between two former middleweight champions, Luke Rockhold and Chris Weidman. Last time they met Weidman and Rockhold were the best of the best. Two highly skilled fighters in their primes fighting for the ultimate prestige of the division, the championship belt.

For the better part of the fight, both men were evenly matched. Then midway through round 3 he threw a clumsy spinning back kick that changed the course of the fight in favor of the former Strikeforce champion, Luke Rockhold. Will Rockhold be victorious once again? Will Weidman get his revenge? November third we get our answer.

Next up we got a matchup between WSOF Middleweight and Lightheavyweight champion, David Branch, and Ronaldo “Jacare” Souza. Branch is looking to extend his win streak to two in a row and the Jacare is looking to bounce back from his decision loss against Kelvin Gastelum.

Branch’s first step up against Luke Rockhold didn’t go as planned and he got knocked up towards the end of the second round, so Souza will be a nice test to see if he hang with the “big boys”.

Souza, on the other hand, is fighting against father time as well. Come December the grappling specialist and the former Strikeforce champion will be turning 39. It’s a safe bet to say the fight against Branch is going to be one of his last ones. So let’s see if the veteran still has what it takes to beat a top fighter.

Now if all of this has got you pretty pumped up, right? Well, get a load of THIS!

Yes, that’s right. The two of the scariest and most jacked looking dudes in the middleweight division are going to fight each other. This is going to be The Hulk vs Doomsday levels of insane awesome madness.

Yoel Romero is coming off a controversial split decision loss against the reigning and defending champ-Robert Whittaker, who is not related to the famous actor, Forrest Whittaker. Yoel is looking to bounce from his loss to the champion and get back in line to get a third crack at the champion.

Paulo Costa, despite looking like Bruce Wayne, is not a superhero but an undefeated Middleweight prospect. His latest fight was against Uriah Hall, where Costa took care of UFC veteran with a combination of body shots and punches. Costa is looking to get another scalp under his belt and what better scalp to take home, than that one of Yoel Romer.

If this all wasn’t enough there’s talk of a fourth middleweight fight between another rising start Israel Adesanya and Derek Brunson.

Now, as a every semi-credible wannabe journalist should, I must report the news correctly. This is still in the works and not quite official… YET.

It is reported that the former boxing heavyweight champion of the world, Mike Tyson, has fiercely beaten up a passenger...