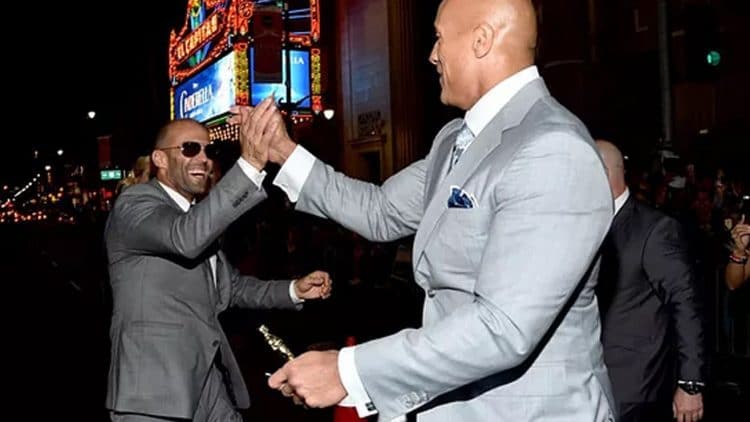 Dwayne Johnson and Jason Statham are currently filming the movie Hobbs & Shaw, the first spinoff of the Fast and Furious movie franchise. Johnson posted the first image from the film on his Instagram page at @therock.

The two actors have been working separate from one another on their scenes. Statham had been working on his own while Johnson was busy finishing up work for Jungle Cruise, a new movie he will be starring in with Emily Blunt.

Johnson is currently on the set of Hobbs & Shaw with David Leitch, the film’s director. Leitch is also the director of Deadpool 2 and Atomic Blonde. This week marks the first week that Johnson has been working on the film.

Johnson posted a photo of him and Statham in what appears to be a scene from the upcoming film. The black and white photo shows the two in character as Luke Hobbs and Deckard Shaw as they are both intensely looking at each other.

Rock also shared a picture on Instagram which marked the first day of filming where Statham speaking with director Leitch on the set in front of a badass sports car.

The two characters have become critical parts of the Fast and Furious series. Dwayne Johnson joined the series in Fast Five as Luke Hobbs was out to pursue the crew as a Diplomatic Security Service agent, but would eventually join the crew. Jason Statham’s Deckard Shaw also was a villain at the start in Furious 7, but he eventually began working with the crew in Fate of the Furious. The big question for this movie is what they’re going to do in this movie.

It’s no surprise that the movie would be made, what with the eight movies in the Fast and Furious franchise has grossed more than $5 billion in theaters worldwide. Johnson is also listed as being the highest-paid actor in the world.

Hobbs & Shaw won’t be coming out in theaters until August 2, 2019, but the movie is expected to be a huge deal. David Leitch is working alongside Chris Morgan on the production of the film. Morgan, who has written for many Fast and Furious movies, is also writing the script here.

Details on the plotline are unknown. Based on what happened in Fate of the Furious, there is a good chance Hobbs and Shaw might be at each other’s necks at the start.

As for the regular Fast and Furious franchise, the series will keep on running. The next installment of the series will be released on April 10, 2020. Details on that movie are unknown, but there is always the chance that the movie might feature some events that come right after this upcoming spinoff. This would make the new spinoff all the more exciting.