Did Conor Mcgregor Apologise To Khabib During The End Of Third Round At UFC 229? 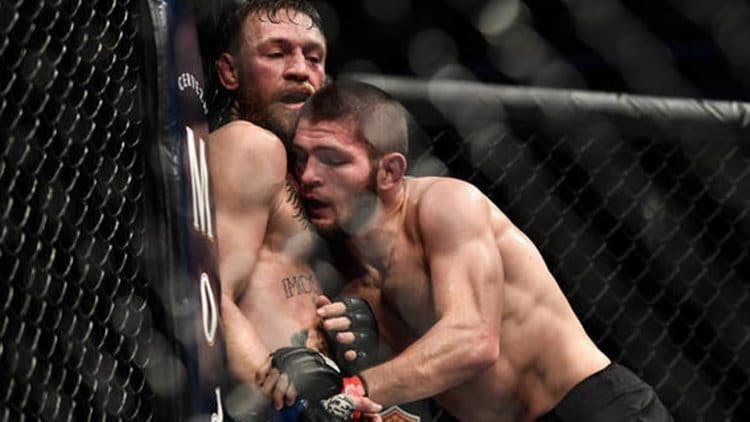 Khabib Nurmagomedov Was Insulted By Mcgregor In the Build-Up Of Their Grudge Match On Many Occasions, But ‘Eagle’ Gets The Last Laugh At UFc 229 In Las Vegas

Former two-division champion Conor McGregor who made his long-awaited Octagon return last Saturday, October 6th at UFC 229 PPV event which was billed as the biggest in UFC history.

In the build-up of his grudge match, Mcgregor fired infinite shots at his opponent Khabib Nurmagomedov, but Russian remain calm all this time. He went on to settle his business inside the Octagon and defeated Irishman by submission in the fourth round via neck crank.

It was a fight supremely dominant by Khabib. By the second round “Eagle’ knocked down Mcgregor to the canvas and went on him, shouting “Let’s talk now” as he pounded the Notorious. Khabib took all his frustrations out on Mystic Mac.

Many fight fans now think that Irishman attempted to make amends with Russian during the midway of the third round for his trash talking and antics ahead of UFC 229.

The question arises here, Mcgregor was already getting his ass pummeled, then what’s the point of apology. Anyway, something makes no sense here.

As the horn rang at the end of the third round with Russian having McGregor clinched up against the fence, Irishman appears to say in his ear:

“It’s only business.” Then Khabib yells and says ‘Aye I Guess So.’

It may be a business to Conor, but for Khabib it was all personal, who after picking the win leaped over the Octagon fence to attack Mcgregor’s cornerman, Dillon Danis.

Check out the video and some Twitter reaction on Mcgregor’s apology:

@bryanalvarez @davemeltzerWON this is footage of the exchange after round 3 (actual audio) the ufc will probably bury and hide of Conor apologizing/explaining himself in the cage. Pretty emasculating and not very "gangster" I suppose. https://t.co/EBJ9QIfqX2

I thought Khabib said "Let's talk." As if to say, "Where's your mouth at now." As for McGregor how confident are you that he said, "It's only business?" I'm like 60/40 confident.