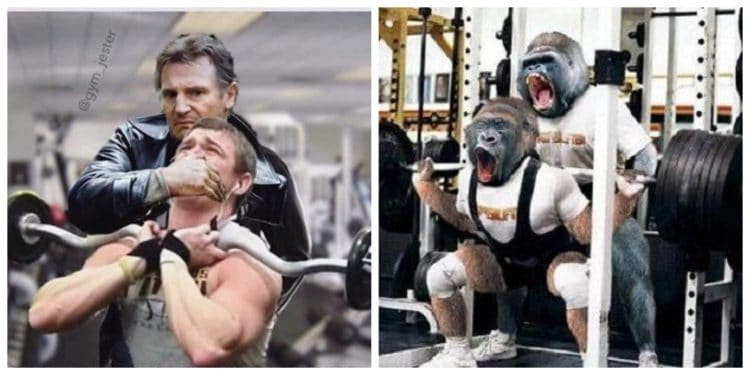 A recent Men’s Health article took a very one-sided dive into the world of grunting during working out. The topic is something “serious” gym goers have been battling with “casual” gym goers since the dawn of mankind.

It all started when Caveman #1 picked up a dinosaur carcass that was a bit too heavy to casually drag so he had to exert extra force to carry it. Whilst in the process of carrying the giant carcass to provide food for the female members of his tribe and bragging rights to his cave bros he was creating an angry vocal sound that represented his struggle and determination to carry the dead animal. 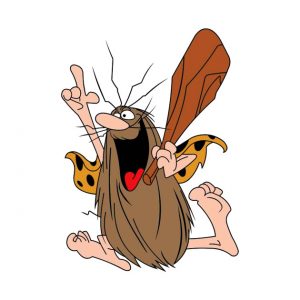 The other, more sensitive and a bit more jealous, cavemen got insulted by this strange noise and complained about it to Caveman #1. Thusly, starting a secret war that will raged on for many millennia to come.

Today, as the fitness industry continues its exponential growth, the casual gym has never been so likely to ever have a close encounter with a hardcore gym rat. A “toxic-masculinity” labeled tattoo riddled, wife beater wearing, gym rat. It’s a clash of cultures…it’s Christopher Columbus meeting the native Americans. And as history has shown us two cultures collide, it doesn’t tend end well for one of the two. 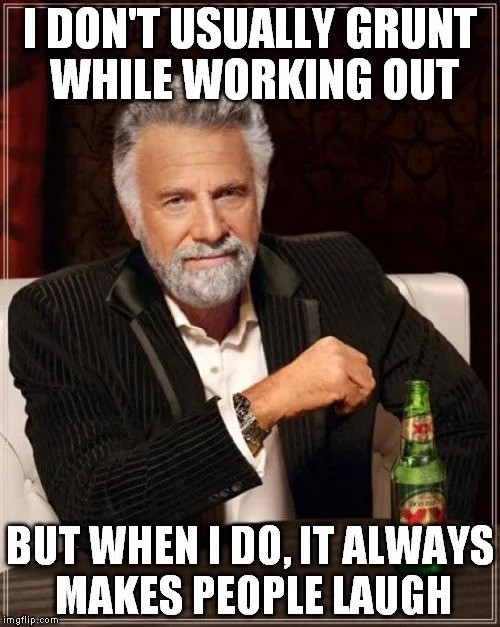 The modern stigmatization of the hardcore gym goer has all the signs of an, as above mentioned, horrible cultural clash. The casual gym goers have never been so vocal about none casual gym goers grunting too loudly. The DVD rewinders of the fitness industry, Planet Fitness gyms, have actual “lunk alarms” that go off if you grunt or drop weights too loudly and other commercial gyms are leaning towards following this vile trend.

But it doesn’t have to be like this, we can all get along. After all, both casual gym goer and hardcore lifters have one thing in common; they both wanna have huge biceps. Now let’s all take a moment and try to demystify and decriminalize grunting.

First off, grunting is a naturally occurring process when you are exerting your self 100%. Whether it be having an epic toilet battle with the contenet of your bowels after being clogged up all day or trying to break your bench press record by 20 lbs. It’s a perfectly normal bodily function. In fact, a study has suggested that grunting may in fact actually make you stronger. The theory goes that when you lift weights with 100% effort and you start grunting, a “flight or fight” mechanism is activated in your brain and forces you to use extra muscle fibers.

On the other hand, there are gym douchebags who grunt, yell and scream like Tarzan himself has possessed them throughout their entire workout. These guys are hated by casuals and none casuals alike and they deserve to die. However, even these human wastelands, shouldn’t be judged by the sounds they make. So, in order to promote worldwide peace and sick gainz here are some tips for both the casual and hardcore gym goers.

It’s that simple, buy a good set of headphones, pop some quality muscle building tunes on the musical device of your choice and you will forget about the angry guy yelling at himself two feet away from you. It will also solve you of another first world problem, the gym playlist. Some gyms will play good, motivational music that motivates you to workout. While others will drown you in Taylor Swift and Nicki Minaj marathons. Buy some headphones, play your own music and drown away the douchebags.

If you can’t stand people, grunting or grunting people, a home gym might be your best solution. Your best bet is buying a decent squat rack/power cage and some weights. It could get pricey, but take this into consideration. Once you buy it, it’s your and yours alone. You can do workout any time of day or night wearing whatever the hell you want and listening to whatever the hell you want. Also, a year’s worth of gym membership tends to cost more than buying a squat rack and a stack of weights.  Even if you are not into heavy lifting and you are working with a budget this THE solution for you. A roll-in-the-door-frame pullup bar is super cheap and combined with some creativity you will be looking like those ripped guys doing two-finger push-ups on youtube in no time.

If you are a fairly buff dude and sign in to a planet fitness gym you can expect judgment, lunk alarms and mean stares. Likewise, if you are a casual gym goer or an absolute beginner and sign in to a gym that has metal music blasting and you hear deafening roars of “yeaaah budddy” and similar catchphrases from dudes so huge they take up two public transportation seats, then maybe…just maybe, that gym isn’t for you. Most gyms have a free trial day, so take that offer…scout the gym, see where all the Instagram models are hiding, what type of people are there, what equipment they offer…etc. Just try to soak up the general vibe of the place and see if it fits you.

For further information on gym grunting, refer to the video below