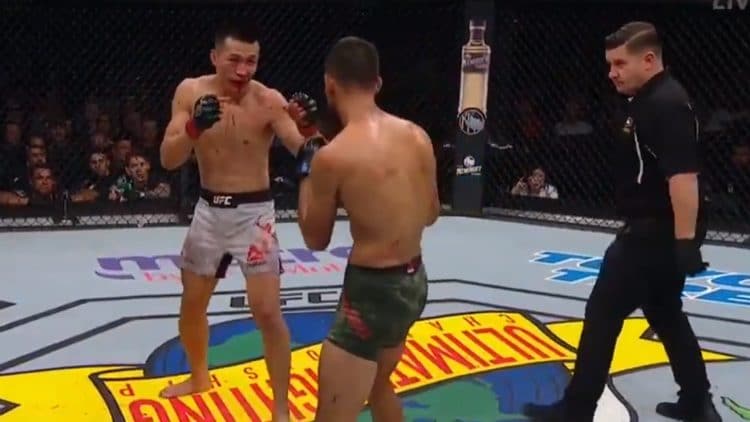 Oh, yes, you read the article well! Yair Rodriguez did a strike that many of us have never seen before. It is spectacular by itself since it came in the last second of the fifth round! “El Pantera” fought Chan Sung Jung aka “Korean Zombie” at the main event of UFC Denver on Saturday night.

“Korean Zombie” was winning the match! Chan Sung Jung wanted to put the Mexican to sleep at all costs, and ended up with his face on the floor instead! Take a look at the highlights in the video below!

Fighters started aggressively in the first round. There were many low kicks on both sides. The Mexican fighter tried to deliver a front kick to the Korean’s face. But we’ve seen a good left from Chan Sung Jung that rocked “El Pantera”. “Korean Zombie” chased him around the octagon, but had no success. Yet, he won the round.

At the beginning of the second round, Chan Sung Jung immediately pressed Yair to the fence. “El Pantera” was trying to land kicks but Korean fighter defended well. We’ve also seen a spinning back elbow counter from Yair Rodriguez. “The Korean Zombie” was better in this one too.

The third round was the most interesting one. Both fighters were trading shots like there is no tomorrow. There were so many attractive strikes from Yair Rodriguez. “Korean Zombie” forced the Mexican to retreat with his amazing flurry of punches too. In the end, we’ve seen an amazing switch kick from “El Pantera”. It was probably the only Yair’s round.

“Korean Zombie” purely dominated “El Pantera” in the fourth. We’ve seen a great uppercut and right hand from Chan Sung Jung that gave a hard time to Rodriguez at the beginning. Yair Rodriguez missed with a spinning back elbow. Jung punished him with a brutal right fist and he was heavily rocked. The Mexican also received an accidental groin strike.

But then, one of the best rounds in the history of this sport! “Korean Zombie” could just pull back, keep the score. But he wanted a KO by any means.

Fighters were throwing everything they had. Chan Sung Jung was controlling exchanges. The Mexican superstar also scored one great spinning back-fist. But near the end, Rodriguez missed with a spinning back kick. Chan Sung Jung should stop. But he started chasing the Mexican with a barrage of punches in the last seconds of the match. “El Pantera” was pulling backward and the Korean missed with a left straight. Then he made a feint with his right hand and missed Yair’s head again with a left cross.

Then, out of nowhere, Yair Rodriguez ducks under to the left to the level of Jung’s hip. Almost instantly, he goes up and delivers a reverse upward elbow to the left side of “Korean Zombie’s” chin. The Korean UFC superstar is stopped, he falls on his knees. In the next moment, Chan Sung Jung is unconscious! What a spectacular knockout!

24 hours removed from there epic war, ‘Korean Zombie’ shared a photo of him and “El Pantera” from the hospital bed.

“My pride is really bad .. I sell a lot .. Haha .. Still .. I love mixed martial arts and I always express my congratulations to my young friend who is always polite. This match should be so satisfying. It’s really ok now! Thanks everyone!” – The Korean Zombie

What are your thoughts on this? Do you agree this is the greatest elbow KO we have ever seen in the history of UFC? This will surely be a part of a highlight reel for a long time!