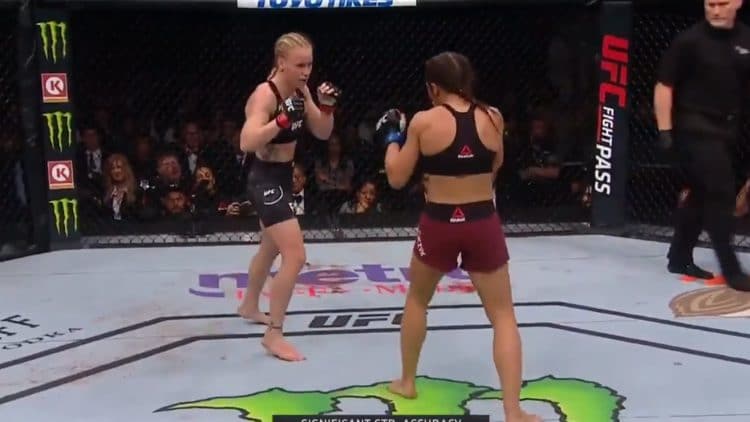 Shevchenko, who has won three of her last four fights, while Jedrzejczyk who lost her UFC strawweight title to Rose Namajunas at UFC 217 back in November 2017, then in a rematch at UFC 223 Jedrzejczyk went on to lose the bout again via decision to ‘Thug Rose’ back in April. Most recently ‘Joanna Champion’ rebounded by defeating Tecia Torres in a one-sided win in July.

Early in their career, both fighters had squared off under Muay Thai rules, and all three times Shevchenko went on to defeat Jedrzejczyk.

At tonight’s bout, Jedrzejczyk has an opportunity to make history by becoming the first female fighter in the UFC to win titles in two different weight classes.

Joanna with a low leg kick and Valentina caught her with a gorgeous spinning back kick to the gut.

By the second round, a low kick and then spinning back kick from Valentina, Joanna with a counter right. Front kick. Shevchenko counter with a straight left. A Body kick from Shevchenko and a Leg kicks from Joanna. Nice combo from Shevchenko. Joanna with a leg kick. Valentina with a counter right and catches a kick and takes Jedrzejczyk down shortly. Joanna got back on her feet but doesn’t break Shevchenko’s grip. Valentina took Joanna back to the mat with a big slam and working from the side again. More elbows from Valentina. Joanna gets up again, and eats a knee and is thrown back to the mat before the bell rings.

By the third round, Jerdzejczyk got better and landed fine knees and finally got a takedown in the round’s last half-minute.

In the fourth frame, Jedrzejczyk picked her pace with her striking, but that led Shevchenko to go back to the takedown and start her grappling game. A fifth-round was pretty similar.

Shevchenko’s long-standing desire to win the title finally comes to an end. With the victory, Shevchenko is now 16-3, with two wins in a row and five in her past six. Meanwhile, Jedrzejczyk (15-3) has now lost three of her past four.

Check out the action below:

First takedown of the bout.

Does @BulletValentina have the advantage on the ground? #UFC231 pic.twitter.com/ddOUGrjHV2

Rose beats Joanna again, this time by decision Following one of 2017’s most impressive MMA upsets when Rose Namajunas knocked...