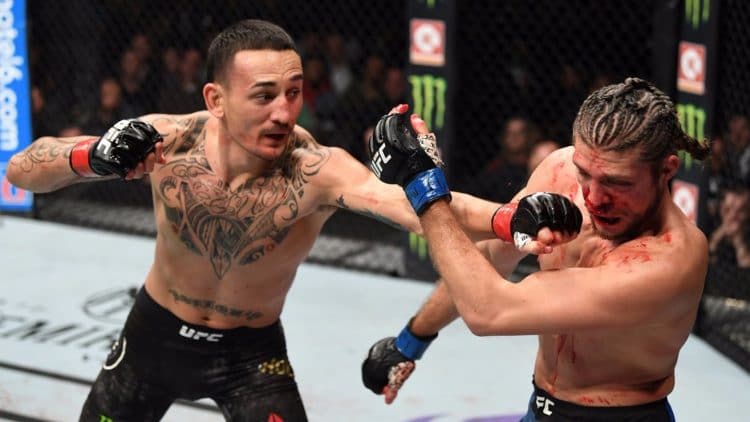 Max Holloway (19-3 MMA) last fought at UFC 218 in December of 2017, where he scored a TKO win over former champion Jose Aldo for a second time.

Meanwhile, undefeated Brian Ortega enters into this showdown with a record of 14-0. “T-City” last competed at UFC 222 event back in March, where he became the first fighter to finish former lightweight champion, Frankie Edgar.

The Hawaii native squared off against Ortega in a thrilling four-round war. The dangerous Ortega overcame the storm and attacked before Holloway found success and won the fight.

The fight turned into Ortega’s favor by the third round as he fearlessly attacked. Holloway weathered the storm, by the time the horn buzzed and round ended.

Ortega made it to the fourth round in which he took a lot of brutal beating, but the cage-side physician calls off the fight, meaning it goes a TKO victory at 5:00 of round four for Holloway.

With the win, Holloway now won 13 consecutive fights, with his last loss came in 2013 against former UFC lightweight and featherweight champion Conor McGregor via decision.

Holloway indicated he’d be open to moving up in a lightweight division.

“I made the weight, I made it look easy,” Ortega said. “Dana White I want to be number one pound for pound, there are some guys at ‘55, let’s do it.”

Who leaves with the strap? 🏆

A clean right by the champ!

What a fight🔥
Congratulations @BlessedMMA you are great champion. 👍

Damn that was a great scrap. Congrats to Holloway and Respect to both 🙏🏽 #UFC231

Wow. Wow. Wow! So impressed by @BlessedMMA not only the best 45er but pound for pound one of the best fighters in the world. Props to @BrianTcity heart of a warrior! @ufc #UFC231

Ahh what a fight! So torn between the two. Such great men. I felt the difference was that handspeed for Max. Great technical fight! Ortega will be back for sure! He has the heart of a lion! #Classic #UFC231

Max having fun in there. Let’s go Hawaiian! @BlessedMMA

Hollaway had a great first round

Great first round by MAX! Fights not over yet! Got 4 more rounds! Who you got?#ufc231

The Bless Express going to 155? 👀 @BlessedMMA has some options for his next fight! pic.twitter.com/yQl2kZDCmQ

UFC 223 continues to pile up with disasters. UFC 223 is having a rough week. First, Tony Ferguson pull out of...