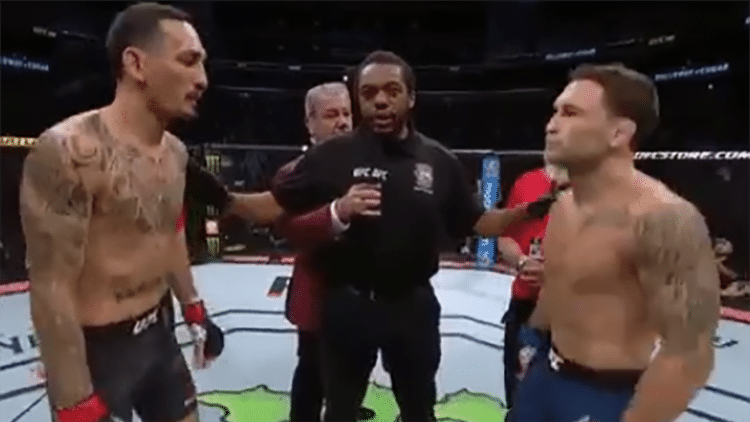 UFC 240 PPV (pay-per-view) event went down last tonight (Saturday, July 27, 2019) from inside the Rogers Place in Edmonton, Alberta, Canada. It was headlined by a great tactical match between the reigning defending 145-pound champ Max Holloway and the former 155-pound king Frankie Edgar. The referee was Herb Dean.

Holloway was cautious in the first round, but his feel for the distance was amazing. Edgar was going forward but he was unable to land clean strikes on the Hawaiian. Max Holloway even delivered one nasty right uppercut counterpunch, but Edgar survived well. 10-9 Holloway.

Max continued landing technical strikes in the second frame. Frankie Edgar was trying to take him down over and over and even landed a few creative strikes. A great right hook slightly wobbled Edgar. Holloway ended the round with a nasty spinning back kick to the body. 10-9 Max.

The third round brought a few interesting exchanges. Edgar took Max Holloway down for the first time but I think he also lost his mouthpiece along the way. But Max got up quickly. This was the round for Frankie, 10-9.

We’ve seen a good exchange in the fourth round, and a high kick that was dangerously close to ending the contest. Yet, it missed by a hair. Fighters were throwing everything they had in the last 40 seconds of the match. Holloway again ended the round with a spinning back kick to the body. 10-9 Holloway.

Frankie landed a few good strikes in round 5, and he went for a takedown again, but Max was ready and stuffed all the attempts. Edgar even attempted a spinning back fist but it was blocked well by the Hawaiian. Edgar went for all or nothing at the end, took Holloway’s back, but Max quickly slipped out of it. 10-9 Holloway.

Masterful way to end the round 👏 #UFC240 pic.twitter.com/23zh3cyTJU

Learn how Joe Rogan stays so ripped with his diet and workout routine! Someone who is too uptight about their...