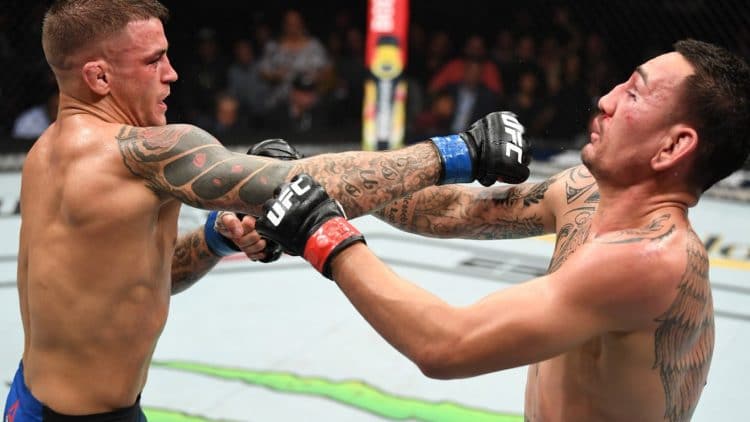 UFC 236 Pay-Per-View MMA event went down last night (Sat., April 13, 2019) from inside State Farm Arena in Atlanta, Georgia. The main headliner featured an intriguing interim lightweight title bout between current featherweight champion Max Holloway who moved up to 155-pound to clash against formal rival Dustin Poirier. Both stars first fought back in 2012 where ‘The Diamond’ defeated ‘Blessed’ via submission. A win puts either contender in a title unification bout against Khabib Nurmagomedov later this year.

Dustin Poirier attacked Max Holloway at the beginning of the match. Until the mid of round 1, Poirier landed more than 30 clean shots. Interestingly, Dustin went down after he ate a big punch from Max Holloway.

Then Dustin Poirier went in for the kill and delivered a strong overhand right that rocked the Featherweight champ. One of the greatest rounds in the history of UFC, Max Holloway survived.

Both fighters continued trading shots in the second round, and Max Holloway looked significantly better. Poirier rocked the Hawaiian with a superb right hand. Holloway was even challenging Dustin Poirier to go forward and punch him.

There was not much action in the third round. Holloway was landing strikes off the distance, while Poirier had a hard time hitting the Hawaiian. This round was dominated by Max Holloway, his movement and ducking skills were superb.

Dustin Poirier surprised Max Holloway in the opening seconds of round 4 – he went for a takedown. Yet, Holloway quickly stood up and recovered. The match quickly turned into a wild brawl, and fighters were throwing everything they had.

After a knee to the face, Dustin Poirer opened a nasty cut on Holloway’s face. Despite the Featherweight champion was bleeding, the match continued. We’ve seen wonderful exchanges but Poirier won the round.

Despite heavy bleeding, Holloway looked fine in the last round. Despite Dustin Poirier outstroke him, “Blessed” was constantly attacking with combos to the head and body. One big left hand seemed to rock Holloway but the Hawaiian continued moving forward.

Poirier went for a takedown and Holloway ended up on the fence. Yet, Max surprised him with a great reversal, and the fight ended.

After five rounds of total war, Dustin Poirier earned a unanimous win over Max Holloway (48-46, 48-46, 48-46) in the main event of UFC 236, and he was promoted the new Interim UFC Lightweight champion. It was a fantastic fight!

Check out Dustin Poirier Vs Max Holloway highlights below:

The knee that cut Holloway!

The 💎 realizes his dream and secures the interim lightweight title! #UFC236

"Get your sh*t together young man! We've got a belt to fight for!"@DustinPoirier has a message for @TeamKhabib #UFC236 pic.twitter.com/0KiyzSV5Ta

After five rounds of a wild brawl, Adesanya captured an interim title after picking up a unanimous decision win over Gastelum. ‘Last Stylebender’ improves his professional score to 17-0 MMA, 6-0 UFC, while Gastelum drops to 15-4, 1 NC MMA, 10-4, 1 NC UFC.

Now Israel Adesanya will move on to face reigning division’s champ Robert Whittaker as soon he heals from surgery probably later this fall.

Head kick from Gastelum rocks Adesanya! WHAT. A. ROUND. #UFC236 pic.twitter.com/qeR89cBcHd

Gastelum gets the takedown but Adesanya gets right back to his feet!#UFC236 pic.twitter.com/OyszPC2Zo0