Ronda Rousey Shows Off Shredded Physique Ahead Of UFC 207 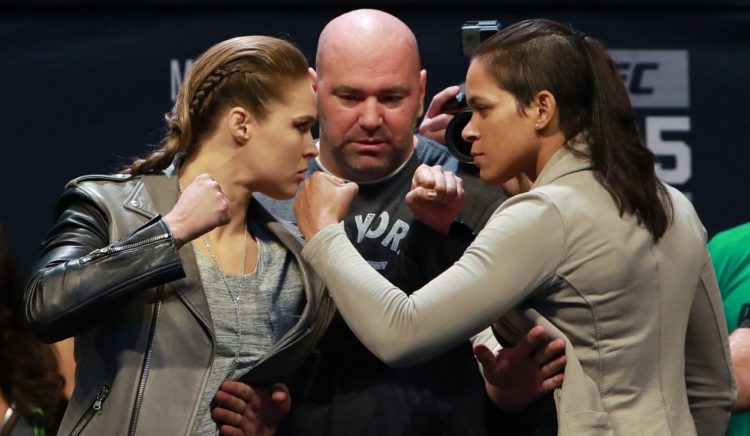 Ronda Rousey may not be “the world’s most dominant athlete” anymore, but she might just be in the best shape of her life. The former UFC champion has been nearly silent ahead of a title match Saturday against Amanda Nunes, but she spoke volumes with an Instagram post-Wednesday.

Rousey pointed out, the photo on the left was taken shortly before her match against Cat Zingano in February 2015, one in which she dispatched her opponent in a mere 14 seconds. That meant that the then-undefeated UFC bantamweight champ had won her past two title defenses in a total of 30 seconds, and it led to a Sports Illustrated cover proclaiming her unmatched dominance.

UFC 207: Tells the story of the UFC superstar, who has remained largely out of the spotlight since her shocking loss over a year ago, leading to swirling speculation about her future. In Ronda’s absence, the UFC belt changed hands twice more, and is now wrapped around the waist of Brazil’s Amanda Nunes. Ronda’s fans desperately want to see her return and reclaim the UFC title, while others cast doubt on whether she’ll ever be the same dominant fighter again.

Ahead of her first fight in over a year, Rousey has mostly created a media blackout, speaking only to a few outlets ahead of her matchup against bantamweight champion Amanda Nunes while staying sequestered in the days leading up to the event. In fact, UFC 207 won’t feature open workouts or a press conference, which are almost always standard for the biggest pay-per-view cards of the year — and Rousey’s return certainly qualifies.

Ronda Rousey: “I don’t care about anything except for winning this fight and I’m not spending energy on anything else,”

Rousey also sent a not so subtle reminder that her fight at UFC 207 takes place on Friday night as opposed to the standard Saturday night card for the promotion due to the event happening a day prior to New Year’s Eve in Las Vegas.

A Bodybuilder Dies After 315 Pound Barbell Drops on His Neck